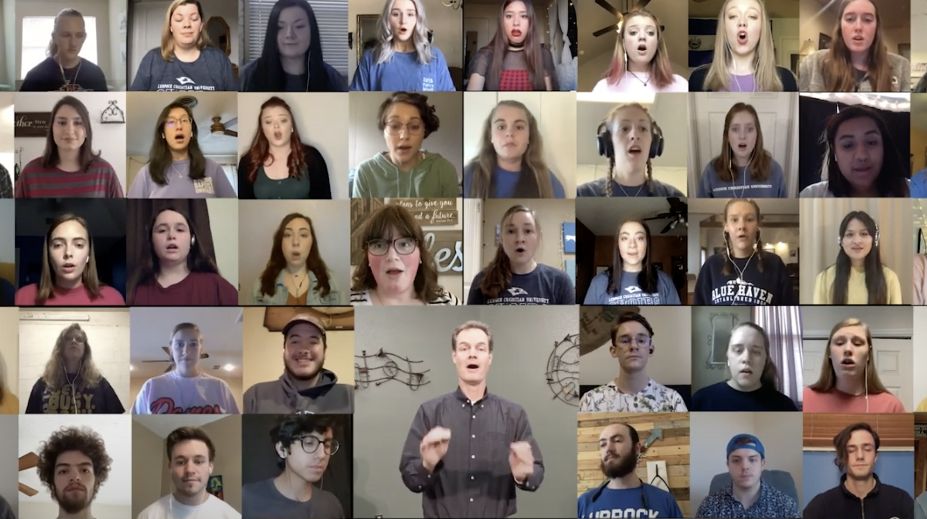 Despite the early end to in-person education in Spring of 2020, the music department at LCU was determined to find a way to continue the comradery, memories, and music from a distance.

Philip Camp, Director of Choral Activities at LCU, decided to create videos of “virtual choirs,” which takes individual recordings of the students performing their parts and combining them into one video, giving the appearance of a full performance without any of the students or professors leaving their homes.

Camp explained, “I knew about the possibility of virtual choirs from the probably the first epic virtual choir performance, Eric Whitacre's “Lux Arumque” from 10 or so years ago.” Whitacre, a famous composer whose works LCU choral programs have performed several times, created a video with performances by 185 singers. It received over 1 million hits in the first two months of its release and has since been watched by nearly 5 million people.

“I knew that something of that magnitude might not be achievable,” Camp said, “but we could potentially do something that would be good and give us a needed performance outlet, though the process is much different than a live performance.”

Camp knew that the learning curve to put the entire production together himself would have been too overwhelming. He pitched the idea to Nathan Anderson, Co-Director of Best Friends and university Audio/Visual Technician, who expressed interest in the project. “That was all that I needed,” he said.

Camp shared that it took a significant amount of time to prepare click-tracks and conduct a video of himself conducting alongside audio of piano keyboard for the choir performances; however, the bulk of the work with audio and video editing fell on Anderson.

“After the initial video of the conducting and click tracks were prepared, those were sent to students who were instructed to sing their part while listening to the audio and following the conducting on one device, and to record themselves with the other device,” Camp explained. “Nathan then mixed the sound and edited the video into the final projects.”

In early April, the first virtual performance in which the LCU Praise Choir sang “Hallelujah,” arranged by Shawn Kirchner, released on YouTube and LCU Choir’s Facebook page to a warm reception. The video featured a special tribute to each of the group’s graduating seniors and was even recognized in an article by The Christian Chronicle.

“I was very pleased with the outcome for both Praise Choir and Chamber Singers' virtual performance,” said Camp. “For the Best Friends virtual performance of ‘Hallelujah Here Below,’ Nathan managed the entire project, including arranging the song, sending out click tracks, and final editing. It was great to be involved in these projects, and especially to see how they were so well received.”

The performances were powerful for the students, as well. “Getting to be a part of the virtual recordings was awesome,” said senior Praise Choir and former Best Friends member Clayton Henriksen. “I love it because it will be a lifelong memory I can look back on full of people who mean a lot to me.”

Landon Camp, another graduating senior and current Best Friends member, said, “Being in choir for 4 years was amazing and while it did not end how I expected it would, it is awesome to know that God is still using the ministry of song through the virtual videos we made.”

One of their classmates, Sadie Wheeler shared, “As tough as this whole pandemic situation has been, doing these virtual choir performances has been a blessing not only for me, but for the viewers as well. Being a senior who is graduating, a lot of the ‘last moments’ that I would have gotten to participate in were taken away, but these choir performances gave some of them back.” She added, “I’m very thankful for the LCU choir, Dr. Camp, Nathan Anderson, and the friends I have made during these four years.”

Learn more about the music opportunities at Lubbock Christian University.