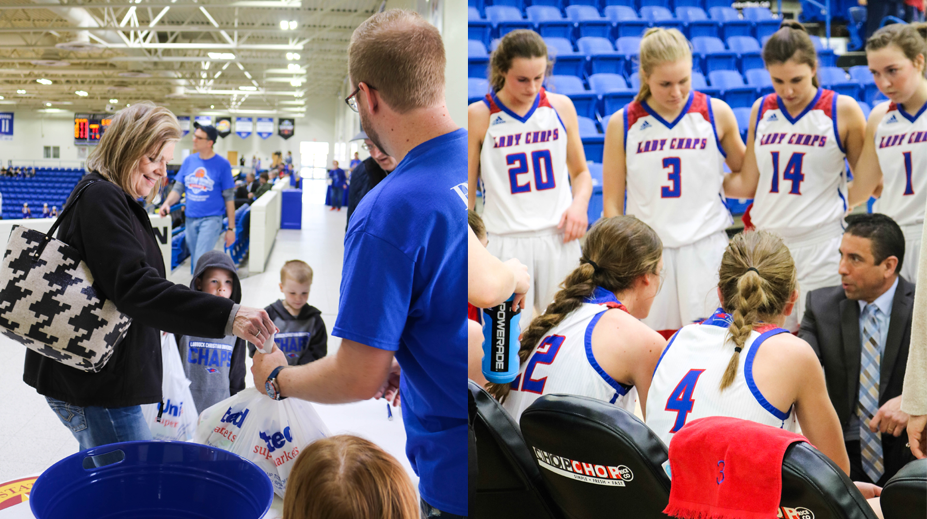 LCU and the South Plains Food Bank teamed up to Slam Dunk Hunger by collecting donations and cans at the Chap and Lady Chap basketball games on February 23.

Fans, students, and community members flocked to the Rip Griffin Center to enjoy free food and fun activities as they watched the LCU Chaps and Lady Chaps take on Oklahoma Christian University Eagles. All proceeds from admission to the game were donated to the South Plains Food Bank, and attendees had the opportunity to bring five cans of food or $5 cash to participate in activities and be entered into a drawing to win an Apple Watch. Principal sponsors for the event were the accounting firm Bolinger, Segars, Gilbert & Moss and Texas Tech Credit Union; additional sponsors included Aramark, Advanced Graphics, Powerhouse Nutrition, and LCU Student Senate.

Hosted and organized by Lubbock Christian University, Slam Dunk Hunger was a continuation of Strike Out Hunger activities from the past five years. The idea to host a spring food drive began in 2014 when Russell Dabbs, event coordinator and LCU School of Business professor, explored opportunities to help collect money and food pantry items for the South Plains Food Bank.

“LCU decided to create a major spring event for the Food Bank to complement the U Can Share Food Drive and other regular food drives that typically occur in the fall,” Dabbs explained. “We found that there was a need for similar events in the spring. It just so happened that our student business organization Enactus had recently received a grant from Campbell’s Soup to help promote community nutrition.  They took on the project and ‘Strike Out Hunger’ was born.”

Since the first event in 2014, the efforts have generated nearly 19 tons of food for the South Plains Food Bank in the form of both physical cans and cash donations—numbers not lost on Dabbs. The annual U-Can Share food drive during the Christmas holidays is very effective and successful, and having this additional event in the spring boosts donations in another, concentrated way to benefit food-insecure individuals and families Lubbock and the south plains.

Dabbs was pleased with this year’s efforts, saying, “The LCU community once again showed its generosity toward the surrounding community by raising 1,721 lbs. of food and over $3,500, in support of the South Plains Food Bank this year,” he lauded. “Over the last six years—the 5 years previous as ‘Strike Out Hunger’ and this year’s inaugural ‘Slam Dunk Hunger’—LCU’s annual food drive has raised over 20,000 lbs. in food and nearly $17,000 in monetary donations for this worthy cause.”

To top off the fun-filled events of the day, both LCU basketball teams won their contests, continuing successful seasons in the Heartland Conference.