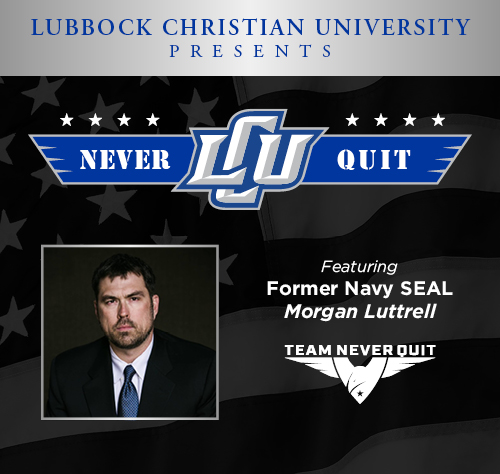 Life is filled with adversity. Many of us find ourselves facing challenges and difficulties on a daily basis. Join us for a motivational message by Morgan Luttrell, former navy seal, as he shares how he has overcome adversity in the face of difficult challenges.

Morgan grew up in Texas on a horse ranch with his mom, dad and twin brother. Growing up on the ranch he was no stranger to hard work at a young age and a keen sense of accountability and discipline. He knew at a young age that he wanted to serve this country as a Navy SEAL. Morgan graduated from Sam Houston State University, with a degree in psychology in 2000 and immediately enlisted in the Navy. He graduated BUD/s in 2002 with class 237.

He served eight years as an enlisted Navy SEAL then attended Officer Candidate School and became a commissioned officer serving a total of 14 years with Naval Special Warfare, medically retiring as a Lieutenant. Through his time in the service, Morgan gained exceptional knowledge on what it takes to be a leader. Going from enlisted to an officer was not an easy task but he met this challenge with honor and integrity.

After his service he pursued an advanced degree in Applied Cognition and Neuroscience at the University of Texas at Dallas, graduating with honors. While in his studies Morgan created a health and wellness treatment program for injured veterans. Knowing firsthand through his own battles with Traumatic Brain Injury, Morgan had a passion to help others and give service members the opportunity for a comprehensive, holistic and individualized care program for TBI, Post Traumatic Stress, chronic pain, addiction and insomnia.

Morgan recently completed a program at Harvard University in Professional Leadership Development further enhancing his knowledge on how to be a leader.

Morgan is happily married and has two sons, enjoying life in the Texas countryside.