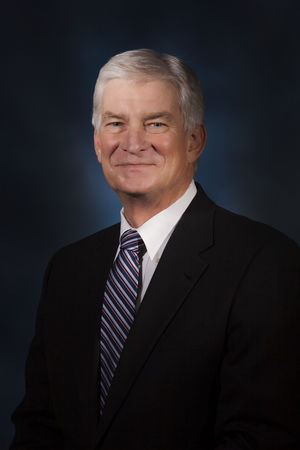 Dr. L. Ken Jones served as the chancellor of Lubbock Christian University from 2011 to 2017, and was named Chancellor Emeritus when he fully retired from LCU in November 2017. Prior to becoming chancellor, he was the university's fifth president from May 1993 through January 2011.

Born and raised in Oklahoma, Dr. Jones shares a passion for farming and ranching with his son who continues the family business near Cordell, Oklahoma. After obtaining a Ph.D. in Engineering from Oklahoma State University and working in that field for several years, he answered a calling to enter ministry, serving several churches as preaching minister, the last of which was Sunset Church of Christ in Lubbock.

Dr. Jones has been a student of leadership for many years, with extensive study and training from well-known leaders in that field. He is a frequent speaker for churches, educational groups, businesses, and major corporations on the subject of leadership. His seminars blend leadership with lessons on quality living, emphasizing the importance of mission, values, vision, as well as the leader’s personal character. He is the author of Leadership After God’s Own Heart and The Ultimate Leader.