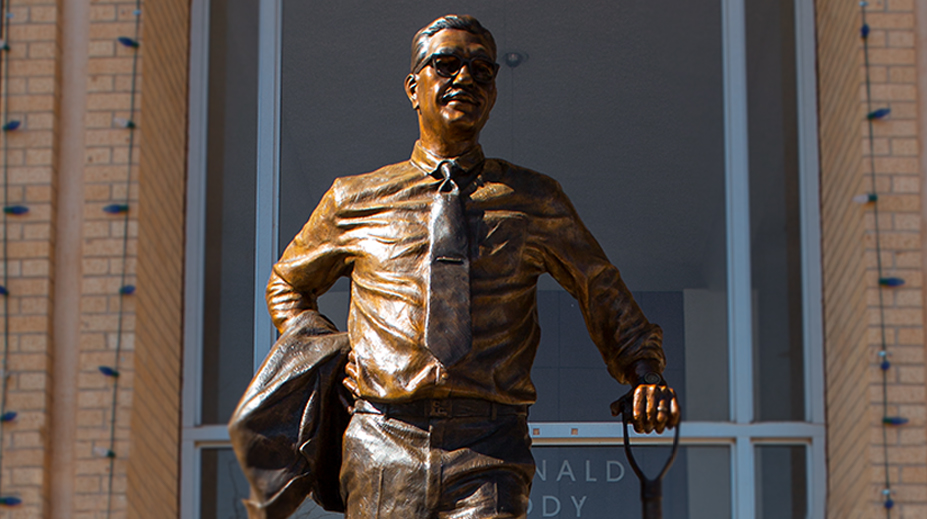 Lubbock Christian University unveiled its newest art installation, a statue of LCU’s Founding President, Dr. F.W. Mattox, Saturday morning on the steps of the McDonald Moody Auditorium as a part of Homecoming 2020.

Alumni members of Sub T-16, a men’s social and service organization on the campus, raised the funds and commissioned the statue in tribute to Mattox for his enduring legacy and life-long dedication as president for the first 18 years of what was then Lubbock Christian College (LCC).

Dr. Mattox was appointed as the first president of the university in 1957, and was tasked with building a university in a cotton field that was west of the city of Lubbock. There were no permanent buildings on the site when he began, and a house that was located in downtown Lubbock owned by Dr. Sam Arnett was donated to be the very first administration building. He sold his farm in Arkansas in trade for a pick-up truck load of books, to which he added 2000 of his personal volumes, creating the college’s library.

The committee to commission the statue was comprised of three former presidents of the men’s group Sub T-16 – Bill Bundy, Bob Cass, and Reagan Fletcher. Their respect and admiration for Dr. Mattox, who was the president of the university while they were students, led them to raise the funds, select the artist, and facilitate locating the statue on the campus.

Attending the unveiling of the statue were some of Mattox’s family members including Patti Mattox Bryant, daughter of Dr. Mattox, and Emily Lemley, a niece of the former president. Also in attendance were the sculptor, Vic Payne, and his wife, Angie, from Wyoming.

An inspirational leader, Dr. Mattox was known for his passion for his work and for envisioning the future for the young college. He was a very proactive leader, always willing to pitch in when work needed to be done. He could often be found driving a tractor in his white dress shirt, tie, and suit pants in between office meetings, bolting in the theater seats for the new auditorium, or working on plumbing under a building. His legacy of hands-on, get-it-done dedication lives on.

A quote from Dr. Mattox as he reflected back on his 18-year presidency at the university is inscribed on the plaque installed at the foot of the statue: “I stood out on this campus and envisioned these buildings. I heard the choir sing. I heard the band play. I saw the graduates march across a stage to receive their diplomas when there wasn’t a building in sight. That vision has been with us from the beginning. We did envision great things.”