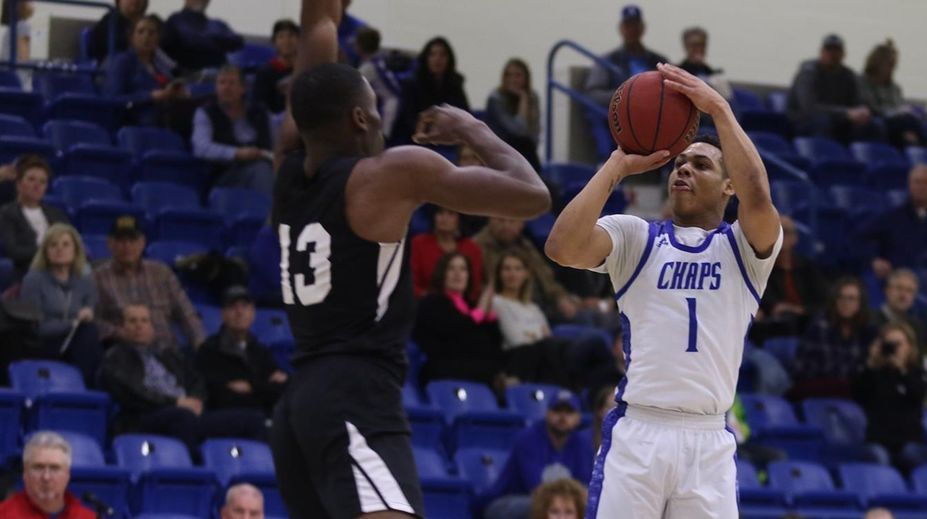 A Tale of Two Halves as Chaparrals Advance to Quarterfinals

The Lubbock Christian men's basketball team had some early madness in March as they turned a 15-point second half deficit into an 18-point win to advance to the quarterfinals of the Lone Star Conference Tournament.

The Chaps will now travel to Frisco, Texas, where they will take on Angelo State in the Comerica Center at 8:30 p.m. on Friday to determine which team advances to the semifinals. LCU is now 19-9 on the season.

Things looked good early as Rashaan Proctor scored the Chaps' first points with a block and a breakaway dunk, but Lubbock Christian ended up playing about as bad as they possibly could offensively during the game's opening 20 minutes. They hit just six shots from the field, two of which were behind the arc, shooting 20.7 percent on 29 attempts. They also hit five free throws, to score 19 first-half points. Midwestern State, on the other hand, shot 48.2 percent, scoring 32 points.

When the final horn sounded, however, it was LCU who had the better shooting percentage, out-shooting MSU 45.3 percent to 45.1 percent. The Chaps started the second half with back-to-back three-pointers from Parker Hicks, who had not scored at all in the first 20 minutes of the game.

Lloyd Daniels followed up with a made jumper before a Ty Caswell three-pointer really got the Chap crowd into the game and gave LCU some momentum. The first miss of the half for Lubbock Christian on a shot that did not include a foul did not happen until the 11:12 mark when Caswell finally missed on a contested layup.

All-told, the Chaps missed just six shots during the second half, posting a 75 percent shooting percentage (18-24). Included in those 24 shot attempts were 11 three-pointers, 10 of which LCU made for a ridiculous 90.91 three-point field goal percentage in the half.

The Chaps pulled within one on a jumper from Hicks, who finished with 15 points and pulled down a team-high 10 rebounds for his fourth double-double of the season. They took the lead on their next offensive possession as Daniels hit a three-pointer. Midwestern State hit a jumper the next time down the floor to tie the game up at 47-all, but LCU would never trail for the rest of the game.

Aamer Muhammad hit three of those three-pointers, scoring 14 second half points, all off the bench, to lead the Chaps in scoring with 17 total points. It is the sixth game the freshman has finished in double-figures and just his second time to lead the team in scoring.

Muhammad hit a three-pointer and was fouled with just over a minute left in the game, hitting the free throw that followed to put LCU up by 15. The Chaps hit all 10 of their free throw attempts to close the game out.

The Chaps also set a new record for free throw percentage in an LSC Men's Basketball Championship game (minimum 20 attempts). LCU shot 95 percent from the line (19-20), breaking the previous record of 90.9 percent (20-22) which was set by Abilene Christian against Texas A&M-Kingsville in 1986.

It'll be the third meeting of the season for Lubbock Christian and Angelo State, as the two teams do battle in the Comerica Center in Frisco, Texas at 8:30 p.m. on Friday. The Lady Chaps, who finished the regular season with a record of 29-3 and on a 9-game winning streak, will also face Angelo state in their quarterfinals matchup Thursday at noon, also in the Comerica Center.