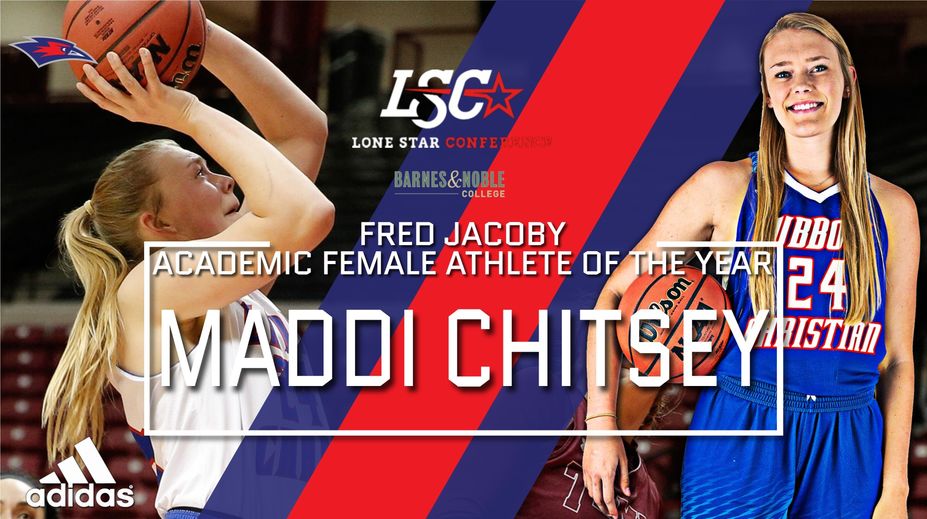 Chitsey joined male recipient Alex Shillow (Texas A&M-Commerce) as honorees of the award bearing the name of Jacoby, the long-time LSC commissioner who passed away in March 2008.  The nominees included the Academic Player of the Year in each sport as selected during the year.

The Exercise Sports Science major, Chitsey picked up LSC Academic Player of the Year honors for women's basketball with a 3.94 GPA, and last week was recognized by the LSC as LCU's female Scholar-Athlete award winner.  Chitsey, a senior from Wall, Texas, adds to her collection of honors this season. This season alone, she has also named to the WBCA and D2CCA All-America Team, All-Texas Team (Dave Campbell's Texas Basketball), All-South Central Team, as the South Central Region Player of the Year (D2CCA), LSC Athletic Performance Team member and she was the first player in Lone Star Conference history to claim the conference's Player of the Year, Defensive Player of the Year and Academic Player of the Year honors in the same season. The returning D2CCA All-Region Selection is best known for her overtime three-pointer in LCU's 2019 National Championship victory over Southwestern Oklahoma State, which led to All-Elite Eight Tournament Honors. She led LCU in scoring (13.5), ranking eighth in the LSC. Chitsey also ranked fourth in the LSC in field goal percentage (46.7%), sixth in blocks (58) and blocks per game (1.9), seventh in field goals made (154) and defensive rebounds per game (4.8) and 10th in free-throw percentage (74.8%). She ranked second on the LCU squad with a per-game plus/minus rate of +16.9 (+17.5 in conference) and is part of a Lady Chaps defense that finished the season leading the nation holding opponents to a 31.7% shooting mark. Chitsey was a LSC All-Tournament Team selection, helping LCU to a LSC Championship title in March.

With the 2019-20 campaign serving as LCU's first season of all-sports membership in the Lone Star Conference, the honor is the first received by a LCU student-athlete.  Finishing second in the female ballot was LCU women's soccer's Haley Knesek. The 4.00 Exercise Science graduate was a D2CCA First Team All-Region selection, First Team All-LSC selection and Lone Star Conference Forward of the Year as a senior. She set career highs in points with 31, scoring a team-high 12 goals and assisting seven others, helping lead the Lady Chaps to a program best 13 wins during the 2019 season.