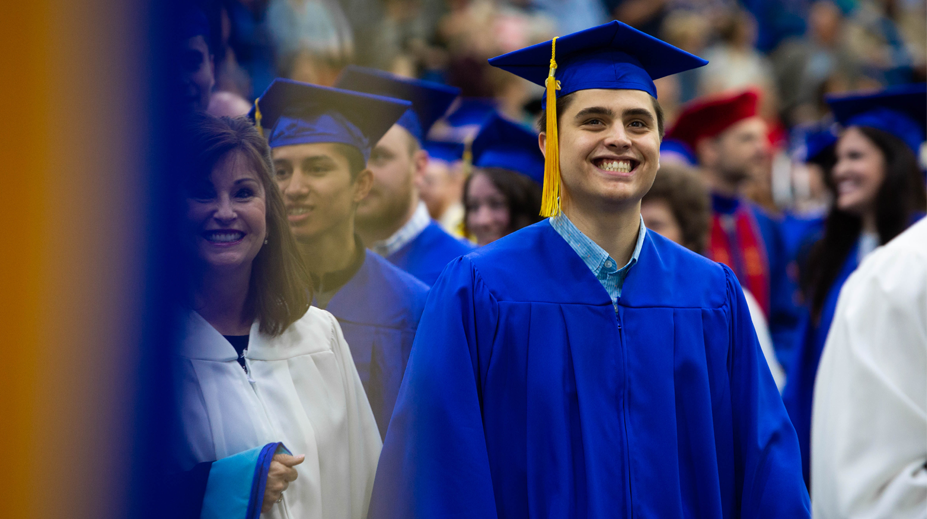 Class of 2019 Walks the Stage in the Rip Griffin Center

On May 12, LCU’s graduating seniors walked the stage inside a packed Rip Griffin Center in front of family, friends, professors, and classmates. The two-hour ceremony celebrated the accomplishments of the diverse group of students from every discipline across campus.

The student speaker for the ceremony, an honor given to one graduate each semester, was Keegan Stewart, who was introduced by Kecia Jackson, Associate Dean of Students. Keegan hails from Grants, New Mexico, and made a mark at LCU inside and outside of the classroom as he prepared to pursue a career in sports broadcasting. He was crowned as the Homecoming King for 2019, and was awarded the Trustees Award. He also received the Communication and Mass Media Student of the Year Award, the highest honor given for his major, indicating his outstanding achievements both in the classroom and in the broadcasting booth as he worked in Chap Radio and other media opportunities in his field. Keegan served as the Alliance President, president of Alpha Chi Delta, and the President of the Student Leadership Council. His speech emphasized the importance of involvement on campus and reflected upon his own journey as he worked toward his degree in Communication.

Dr. Don Williams, LCU Professor of Communication and Theater, was the invited speaker for the undergraduate commencement. Dr. Williams is an iconic professor completing fifty years of service to Lubbock Christian University. His first association with the university was as a student—but after graduating in 1962, Williams came back to his alma mater in 1969, beginning five decades of profound and enduring influence on his students and his peers. He has served as academic dean and then as dean of the Hancock College of Liberal Arts from 1987 to 2009 after then-LCC transitioned to Lubbock Christian University. In 2010, he was named Director of Graduate Studies, a role he held until 2017.

Williams has also directed or co-directed over 60 productions for the university, many of which were grand, full-scale musicals. He has served as the assistant director of “TEXAS,” the outdoor musical drama in Palo Duro Canyon for the last 19 years, and he directed “God’s Country,” an outdoor musical drama at Crosbyton from 1986 to 1992. Williams has written five plays including a production celebrating LCU’s 50th Anniversary, and he has served as chair of the LCU Master Follies committee since 1990.

The ceremony marked the official end of the spring 2019 semester at LCU, culminating in a celebration of the achievements of the class of 2019.

Want to learn more? Check out the academic offerings at LCU.