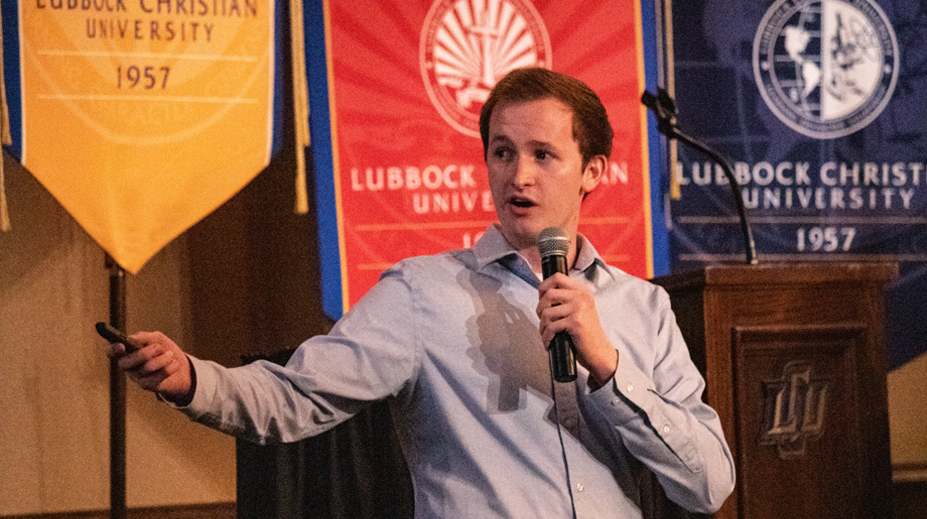 Amid the Covid-19 restrictions and the subsequent transition to distance learning for the duration of the 2019-2020 academic year, LCU students and faculty were not able to participate in the National Conference on Undergraduate Research (NCUR), and the university was unable to host its annual Scholars Colloquium. Even through the challenges, however, the culture of academic excellence and discovery has remained a powerful staple of LCU’s identity.

“Our students are capable of such impressive and inspirational professional and creative work, and we regret that NCUR and our Colloquium were not venues for featuring all that they have been working so hard to prepare,” shared Dr. Kenneth Hawley, Professor of English, Director of The Brian S. Donaghey Center for Boethian Studies, and Director of Undergraduate Research at LCU. “We are encouraged, though, that our campus of learners, scholars, and mentors is an active and generative community of intellectual and spiritual life, and we know that their journeys are just beginning and will take them far beyond any event on our academic calendar.”

The first presentation forum foregone this year would have occurred March 26-28, explained Hawley.

“21 of us (16 students and 5 faculty) would have been in Bozeman, Montana, for NCUR. LCU has participated in the conference for many years now, and this year would have featured a very strong group of excellent student scholars, as well as representative faculty mentors Philip Camp, Julie Marshall, Ronna Privett, Jessica Rogers, and myself,” Hawley explained.

The following alphabetical list of student presenters reflects the broad range of participation that LCU has fostered over the last decade, with projects from disciplines throughout the Arts and Sciences:

Sarah Fantinel
Redefining the Novella: An Exploration and Identification of Generic Form

Rita Reyes
The Construction Worker Act of 2020: A Policy Proposal for the Integration of Undocumented Immigrants into the United States of America

Caleb Scoggins
Presidential Rhetoric: Rhetorical Vision to Heal the Nation in the Administrations of Reagan and Obama

Luke Shelburne
Swords into Plowshares: An Ecological Reading of the Prophet Micah

Later this semester, LCU had to cancel the annual Scholars Colloquium, which was scheduled April 15-17. LCU had scheduled 101 sessions (84 oral presentations and 15 poster presentations) over the three-day period of the Colloquium, two of which would have been plenary sessions featuring the recipients of our Outstanding Undergraduate Research Awards. The event would have also scheduled sessions on student learning and faculty development with Dr. Saundra McGuire, Professor Emerita in Chemistry from LSU, as well as musical performances by our choirs and a band ensemble, poetry readings from selected student authors from the 2020 edition of The ChapBook, and an exhibition from our outstanding art students.

“When the Covid-19 restrictions were put into place this spring, the Advisory Council had just narrowed our field of applicants for these awards to 8 finalists—all of whom were scheduled to present at NCUR in March,” explained Hawley. “The Rhodes Family Institute for Undergraduate Research is happy, then, to recognize all of these remarkable students and their faculty mentors for the innovative, insightful, and meaningful work reflected in these projects.”

The list below is only one dimension of the good work that is happening across the LCU community, but the university is pleased to congratulate and honor the following students whose accomplishments have been recognized by a national conference and affirmed by its own Advisory Council on Undergraduate Research:

Responding to the recent increased popularity and use of essential oils, considerable research has focused on the extraction of rosemary oil, with single-comparison studies done among a number of methods. Such studies have not fully explored fundamental extraction methods such as cold press and simple solvent extractions. This research study is a comprehensive comparison among four extraction methods: microwave assisted steam distillation, supercritical CO2 extraction, direct solvent extraction, and a cold press. Ultimately, this project has verified that, contrary to our initial assumptions, microwave steam distillation is the most promising of the methods studied in terms of oil yield.

With advances in the field of genetic modification and with specific attention toward Arachis hypogaea, there is potential for an incorporation of mutations that could induce positive effects on the levels of palmitic acid in peanuts. These mutations will be directed towards β-keto-acyl-acyl carrier protein synthetase II (KASII), an enzyme involved in fatty acid synthesis. As peanuts are an important nutritive source of healthy fats, raising the level of palmitic acid could lead to increased health benefits and improved shelf stability in peanut products. This study seeks to sequence the KASII gene for specific polymorphisms that alter KASII enzymatic activity. Sequences collected will provide information for the future development of genome editing tools to introduce modifications to the KASII gene sequence.

Streptococcus mutans is a major part of oral microflora that form dental biofilms (plaque) and, along with other bacteria, contribute to cavity development. Dental biofilms erode tooth enamel by metabolizing sucrose and producing acidic end products. This study uses a crystal violet assay to compare the effects of sucrose (a caloric sugar) on biofilm formation by S. mutans with two non-caloric sugar substitutes (xylitol and sucralose) all widely used in beverages and foods. Xylitol and sucralose both indicated less growth than sucrose, and there was no difference in biofilm density between sucrose and xylitol, but sucralose had a lower biofilm density than both xylitol and sucrose.

A study in 2019 reported that the number of children in the United States with a peanut allergy has increased by 50% since 1997. People who show allergenicity to peanuts have up to a 55% sensitization to the ARAH3 allergen. Preliminary findings showed contradicting information about the variability in epitope 3, the most recognized epitope by patient sera, within the ARAH3 allergen. The amino acid sequence of each sample was analyzed, and the homology of the samples’ sequences were compared to identify any differences in the area of epitope 3 of the ARAH3 allergen. It was found that epitope 3 was strictly conserved among the sampled peanut cultivars.

Rita Reyes (Faculty Mentors: Dr. Kenneth Hawley and Dr. Olga Pahom)
The Construction Worker Act of 2020: A Policy Proposal for the Integration of Undocumented Immigrants into the United States of America

The 116th Congress is considering a $2 trillion infrastructure bill that aims to strengthen the U.S. economy and that projects an 11 percent growth in the overall employment of construction laborers by 2028. This policy proposal argues that Congress should provide the opportunity for undocumented immigrants who have been in the country for many years a chance to be considered for an employment-based program that will fill the construction labor gap and offer a path towards earned citizenship. Using a logical analysis methodology, this proposal applies government data statistics, industry reports, and policy research from advocacy groups to make recommendations from an economic perspective.

Micah 4:3 famously prophesies that swords will be beaten into plowshares as the Lord's peaceful reign is established, and most interpretations of Micah emphasize the political nature of that peace. However, the consistent agricultural and environmental imagery in Micah and its scriptural context speaks of a more holistic reconciliation. This literary and sociocultural reading argues that Micah portrays a new age characterized not merely by political peace, but a peace defined by cultivation of and care for creation. Micah's prophetic vision has rich ethical implications for modern social and environmental issues like economic inequality and destructive farming practices.

To understand the influence of Martin Scorsese’s Taxi Driver (1976) on Todd Phillips’s Joker and its place within popular culture, this study will examine its central message, exploring and interpreting the key ideas in Taxi Driver and assessing the rhetorical implications of the symbols that the film’s cinematic language expresses. The study will show that by condemning the crippling isolation and reckless self-righteousness of his anti-hero and contrasting his behavior to that of an active member of society and participant in the political process, Scorsese champions community for the sake of improving humanity.

During an interview in 1964, only a few years after publishing To Kill a Mockingbird, Harper Lee was asked to define her objectives as a writer, and she boiled down her goal to a single statement: “all I want to be is the Jane Austen of south Alabama.” This assessment of Lee and Austen, grounded in an in-depth reception study on both authors, finds that while each writer critiques the society in which she lives, Harper Lee’s cultural influence has transcended Austen’s by moving from social critique to social justice, going well beyond the Jane Austen of south Alabama to become a cultural icon, challenging individuals to live ethically in community, seeing life through the eyes of others.