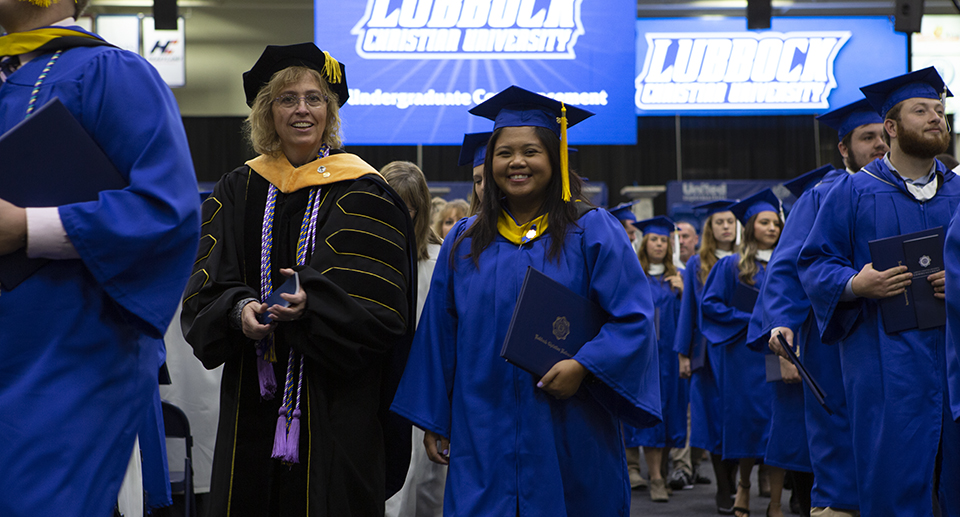 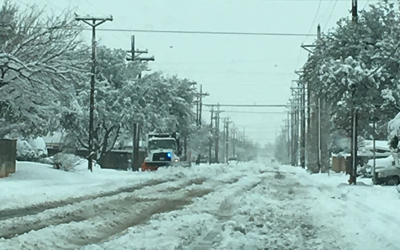 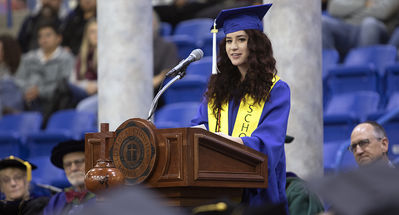 Despite Inclement Weather, LCU Class of 2018 Celebrates with High Spirits

In spite of heavy snowfall early Saturday morning, graduates gathered later that day with family, friends, professors and staff to commemorate the completion of their degrees in LCU’s Rip Griffin Center.

When weather forecasts for the day of the graduation ceremony began predicting 1-2 inches of snow, there were questions of whether or not the event, scheduled for 10 that morning, would be delayed. Initially, the timing appeared to benefit those traveling, as temperatures were predicted to warm quickly on Saturday, keeping the dangers to travelers to a minimum. However, the anticipated precipitation amount was quickly surpassed as snow continued to fall throughout the early morning hours on Saturday, blanketing the south plains in a layer as thick as 10 inches in some areas—surpassing the city’s annual average snowfall within less than 24 hours.

University leadership decided that it was in the best interest and safety of those involved in the ceremony to delay until 2 o’clock that afternoon, when travel conditions would be more favorable.

That afternoon, the Rip Griffin Center filled with graduates, along with their family and friends, celebrating the completion of their individual degrees. Despite the difficulties surrounding the timing of the ceremony, spirits were high, and Dr. Foy Mills, Provost and Chief Academic Officer at LCU, took a few minutes at the beginning of the service to thank those who had worked through the early hours of the morning to make sure the event was as safe and accessible as possible, clearing roads and parking lots.

"It was amazing to witness the LCU community’s adaptability on Saturday to ensure that our graduates, their families and their friends could celebrate commencement in the midst of a snowstorm," Dr. Mills said. "What a grand day it was."

Dr. Michelle McCord, Superintendent at Frenship ISD, addressed the graduates during the ceremony, emphasizing the importance of character, sharing that as they go out into the world, the most important thing is not where the graduates are working, but instead what kind of people they strive to become.

Cassidy Davis represented her graduating class as the student speaker for the ceremony.  Her message reminded her peers and future students of LCU to always be ready to say, “yes,” to opportunities, even though those opportunities might seem beyond your present capabilities.  Her message included personal examples of when she overcame her fears in certain academic and personal challenges while at LCU and with results of how she was blessed because of her willingness to say, “yes,” and take a chance.

The ceremony concluded with the traditional singing of the Alma Mater and hymn, “The Lord Bless You and Keep You,” led by LCU professor of chemistry and lecturer in music, Dr. Byron Rogers.