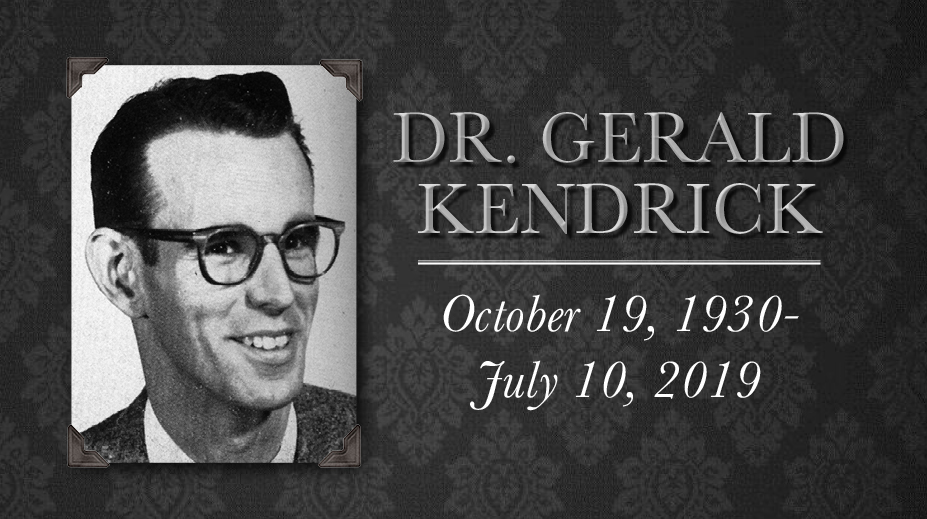 Dr. William Gerald Kendrick, one of the founding members of LCU’s faculty, passed away peacefully on Wednesday, July 10, 2019 at the age of 88.

Dr. Kendrick was born October 19, 1930, and grew up in Magnolia, AR and Shreveport, LA where he graduated from high school. He went to Harding University in Searcy, AR, where he received a B.S. in chemistry and an M.A. in Christian Education. He did his master's work at Texas Tech University in history and German, and later received a PhD in New Testament from Baylor University, Waco, TX.

“In my conversations with others who also remember his classes in Bible and Greek, all agree that he brought intensity, conviction, enthusiasm, and careful preparation to his work,” recalled Dr. Steven Lemley (’65), former LCU President who currently serves as Distinguished Professor of Communication, who also took Dr. Kendrick’s classes as a student. “The words that I have spoken about him, and that I hear from other alumni, is that he ‘brought life to the people who populated the pages of the Bible, provided clear explanations of the Bible’s teachings, and always had a practical application to the lives of young college students of those days.’ I am thankful that he was my teacher, thankful for the difference he made for all of us, and appreciative of his eleven years of dedicated work with this institution.”

Dr. E. Don Williams (’62), former LCU Dean and Professor of Theatre, also recalled Dr. Kendrick’s classes fondly, reminded especially of his passion for biblical translation. “He was a great teacher,” Williams said. “I had him for Romans and the class was excellent. His tests were tough, particularly Old Testament survey, and that was a period when he introduced his students to the Revised Standard translation of the Bible.”

Dr. Gerald Turner, former LCU student and President of Southern Methodist University for nearly 25 years, said, “One of the individuals with the greatest influence on my life was Gerald Kendrick, instructor in the Bible department. He was the kind of professor loved by inquisitive students because he was bright, articulate, and often in turmoil over some political, social, or religious issue, which made for some passionate presentations. I loved going to his class. One of his great gifts to me was teaching me and others that the Bible could be studied just like any other book. We learned that each biblical writer had a purpose and an organization and that there was an important history behind many of the phrases and concepts used by the writers. Although one can get bored with the ‘whats’ or facts of the New Testament, one can never exhaust an effort to understand the ‘whys’ of the Bible.”

Following his time at LCU, Dr. Kendrick served as an adjunct professor in Religious Studies at University of New Mexico for 15 years, and held pulpit ministries in Arkansas, Louisiana, Texas and New Mexico. In the final stage of his career he served as a translation consultant for United Bible Societies (UBS), working with native translators in Navajo in New Mexico, Yupik in Alaska, and Huong, Lau, and Vietnamese in the USA, as well as American Sign Language. While working with translations, he traveled throughout the United States, and was able to travel to numerous countries, including Canada, Thailand, Germany, and England. He served on the board for Vietnamese Bible, Inc. after he retired from UBS.

In retirement, he loved reading, photography, traveling, and teaching Bible classes at church.

Dr. Kendrick is survived by his wife of 64 years, Marjorie Jane Kendrick; and son, William Les Kendrick, his wife, Donna and their daughter, Jessica Ross. He had a lifelong commitment to teaching and was highly-regarded by many former students and others who appreciated his insights and approach to biblical interpretation.