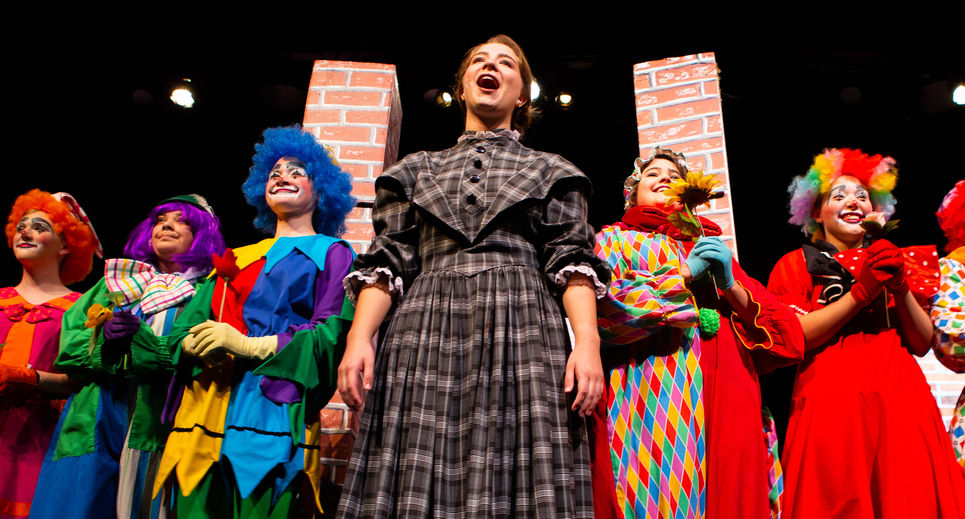 Fall Musical Barnum a Colorful Circus of a Show

When the actors’ voices are mesmerizing and clowns are swinging across the stage as the band plays a show-stopping number about joining the circus, the audience can tell they’re at a great show.

“Barnum,” the fall musical by Lubbock Christian University Theatre Department, played Oct. 5 and 6 at LCU, directed by Dr. Laurie Doyle, professor of fine arts. The show is based on the life of showman P.T. Barnum spanning 1835 through 1880.

There is no flashy opening number in “Barnum.” Instead, it immediately hones in on the characters, particularly P.T. Barnum (Clayton Hendrikson) and his wife, Charity (Abby Langford), who have a brilliant exchange right off when she tries to escape his "hum bug." Meanwhile, Barnum tries to sell the audience on humbug – or creative falsehoods.

One of the first secondary characters introduced, Joice Heth (Kelsey Johnson), provides early comic relief while Barnum grows his show. Johnson was an immediate stand out as the supposed “oldest woman in the world.” There was no humbug about her performance, and the audience laughed when her song and dance (“Thank God I’m Old”) ended with her dropping tiredly on the keys of the piano.

Barnum himself is an endearing protagonist, despite the fact he builds his business on lies, mostly because of how Hendrikson plays him. Hendrikson’s energy is engaging as much in his opening number (“There’s a Sucker Born Every Minute”) as in the softer ballad to his wife (“The Colors of My Life”).

And then Langford began singing Charity’s part of “The Colors of My Life” and stole the show. Her voice was gorgeous and her sassy but caring personality is great as a foil to the show's over eager namesake.

Other secondary roles made similarly lasting impact to Johnson’s performance as Heth. Tom Thumb (Braden Jones) lilting into his falsetto was a great touch that made his solo memorable. Then, following a comedic exchange with Barnum, Jenny Lind (Hannah Flourney) began to sing, and it’s believable that she's the Swedish Nightingale; her soprano was mesmerizing.

The clown chorus was a riot as they bumble around bringing props and set pieces on stage. They fulfill roles for comic relief and chorus vocals, as well as being the primary technical crew for the stage. They are both Barnum’s willingly gullible audience and the part of the show he’s selling.

The Ringmaster (Jay Lokey) tied it all together by directing scenes for the show and ever adding a circus spectacle feel to the musical, even for the odd stint of Barnum’s life where he pursues politics (“Black and White”) before realizing his life has much more colorful prospects.

Friday night turned a good audience despite the downpour of rain, and Barnum was well worth the effort. Congratulations to the cast, crew, and clowns who took their final bow for this circus Saturday night after months of work – the humbug paid off.