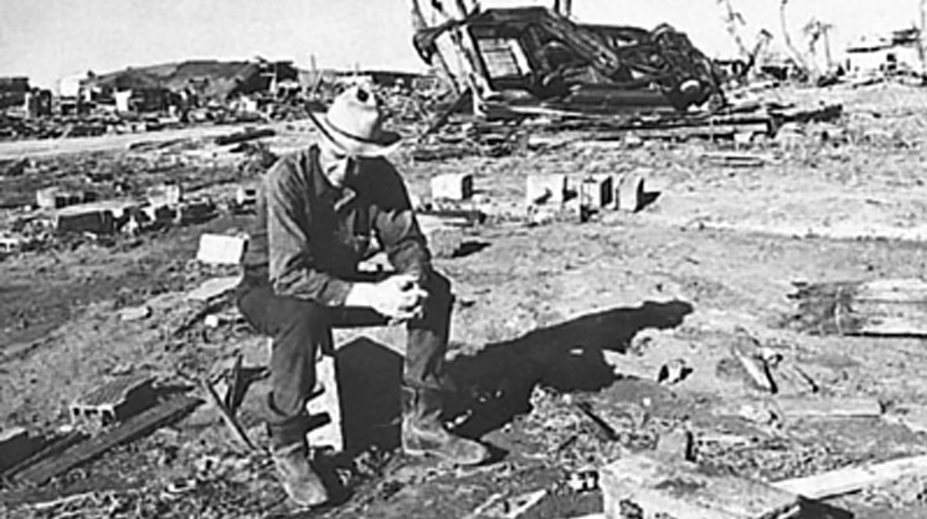 Fifty Years Later — The 1970 Tornado, and an Opportunity for Service

On May 11, 1970, one of the most devastating tornadoes in American history tore through downtown Lubbock. Today, fifty years later, Lubbock Christian University remembers those affected by the tragedy, and the unique way in which it was positioned to help in the aftermath.

The tornado, later categorized as an F-5 on the Fujita scale, the highest official classification used by meteorologists, was actually the second to touch down in the Hub City that day. The first caused minimal damage about an hour earlier, touching down at around 8:30 p.m. near Broadway and what is today Martin Luther King, Jr. Blvd. At around 9:35, the second tornado made contact, first hitting the intersection at 19th and University—and its effects were nothing short of devastating.

Carving a path eight-and-a-half miles long through downtown Lubbock that extended to the Airport, the storm took a catastrophic toll on the city, both in terms of property damage and human life. The National Weather Service Forecast Office in Lubbock reported approximately 10,000 automobiles damaged or destroyed, and 119 aircraft demolished at the airport. 600 apartment units, 250 local businesses, and 8,800 family units were damaged or destroyed, and an estimated 80% of plate-glass windows were destroyed in downtown Lubbock. Worst of all, the tornado killed 26 people, injured more than 1500, and left thousands homeless. The total damage was estimated at around $1.5 billion, and the tornado was so destructive that it is regarded as one of the worst ever in the U. S.—local radio broadcasters were even given presidential citations by President Richard Nixon after the disaster.

Even amid such a catastrophe, however, LCU found itself in a unique position to come to the aid of the greater Lubbock community. At that time, the basements in both LCU dorms and in the F. W. Mattox Administration Building were designated as civil defense shelters, and several families arrived seeking shelter from the storm.

Vernon Brown, who worked in campus security for many years, recalled first hearing of the storm from students who were seeking ways to help in the cleanup that very night.

“One of the boys came from the dorm and stopped me and asked if he and another student could go over to Tech to help with the relief efforts just getting underway,” he said. “I had no clue what he was talking about, until he told me about the tornado.”

Dr. Don “Doc” Williams (’62), longtime LCU professor and administrator, recalled that the storm hit just after many staff and faculty members left campus. “That was the spring of my first year at LCC,” he recalled. “We had the annual faculty-staff dinner in the cafeteria that evening. We finished just before the tornadoes started.” Soon after the storm, many returned to the campus, seeking ways to help the devastated community.

Perhaps the university’s largest contribution to aid the victims was in providing both shelter and water. After the storm, much of the city’s infrastructure was in ruins, and clean water was difficult for many residents to come by. LCU had its own well, which was unscathed by the storm, so the city designated it as one of a few sites where residents could get reliable, clean water—thousands of residents were served.

Additionally, under the oversight of disaster relief organizations such as the American Red Cross and the Salvation Army, LCU was designated as a temporary care facility and distribution center. The field house, as it was called then, was set up with cots for displaced families, and medical and clothing supplies were distributed—Brown even recalled helping unload trucks of Serta mattresses.

The university even utilized the cafeteria to make meals for its temporary guests, which provided an extra measure of comfort for many people who were facing one of the toughest points in their lives.

Fifty years later, LCU strives to remain a force for service in the Lubbock community. Remembering the victims of the storm, the event reminds those who were there of how tragedy can truly bring a community together.