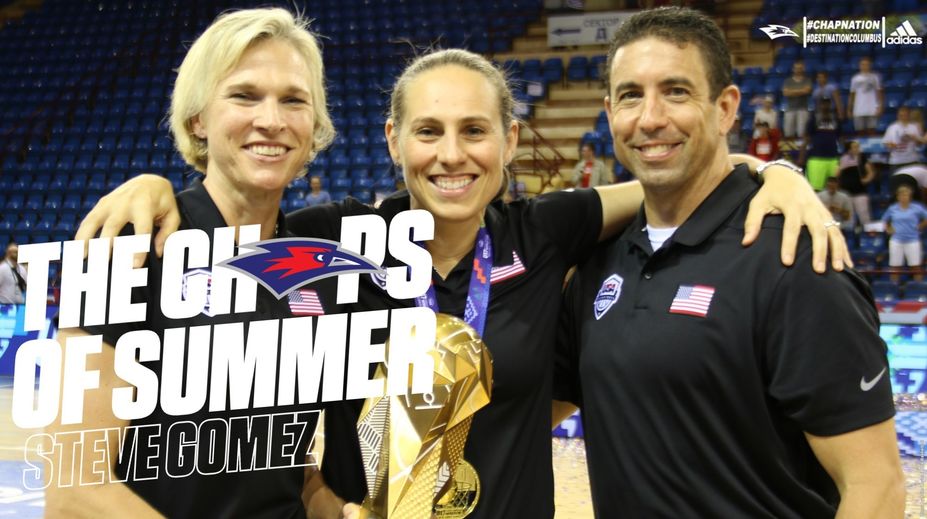 The Chaps of Summer Steve Gomez

As part of the coaching staff of USA Basketball Women's U17 team, Lubbock Christian University women's basketball head coach Steve Gomez added to his achievements when team claimed a gold medal by defeating France 92-40 in FIBA U17 World Cup in Minsk, Belarus.

The stakes were high as Gomez went into his third year in a coaching capacity with USA Basketball, serving as an assistant coach for two seasons. Though the USA team claimed the gold at the 2017 FIBA Americas U16 Championship in Argentina, the competition this year was much stronger and the experience larger.

By the end of the 35-day World Cup process, Gomez reflected on the positive similarities between the USA team and the Lady Chaps.

“I have definitely been spoiled with the maturity of our players here at LCU and their unity and sacrificial living/playing,” said Gomez. “It was refreshing to see that girls at an even younger age could buy in to a team concept in a short amount of time and really enjoy playing with and for each other.”

Before traveling to Belarus, the team spent time training in Washington, DC, then played a series of exhibition games in Liepaja, Latvia. Once reaching Belarus, the team took wins over Italy, China, Mali, Columbia, Spain, and Hungary before facing France in the final round of the World Cup.

This gold medal was the fourth achieved by USA Basketball's U17 program in the last five years, but marks the last year Gomez will be participating in this capacity with USA Basketball.

“These three years have been an amazing experience and a tremendous honor,” said Gomez.

Gomez recently finished his 15th season as the head coach of the Lady Chaps, where he is 365-117 all-time. He has led LCU to five conference titles and a NCAA Division II National Title (2016) during his time. The 2015-16 season led to WBCA NCAA Div. II National Coach of the Year honors. Last season, LCU went 31-2 and received a berth to the NCAA Division II Elite Eight Tournament. Gomez was recognized with Heartland Conference Coach of the Year honors.

The 2018-19 Lady Chaps basketball schedule will be released later this fall.