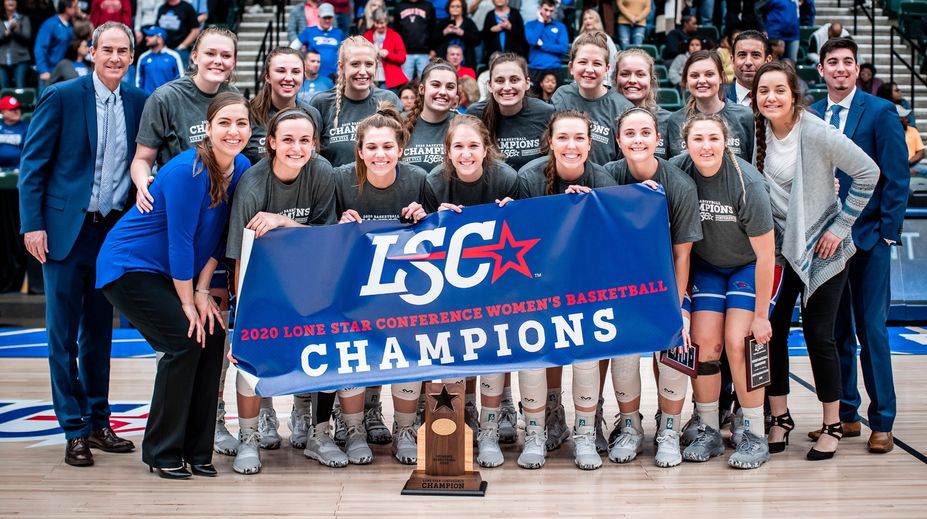 No.6 Lubbock Christian University held the Lone Star Conference's top-offensive scoring team, No.7 Texas A&M-Commerce to a season-low 44 points and claimed their first Lone Star Conference Championship in program history with a 57-44 win over the Lions in the championship game of the conference championships inside Comerica Center Sunday. The win not only provided LCU an automatic berth to the NCAA Division II Women's Basketball National Tournament, but late Sunday night the NCAA announced LCU as the top-team in the region and they will host the eight-team South Central Region Championship inside Rip Griffin Center.

LCU, who fell behind by 18 points in the first half of a 59-54 loss at A&M-Commerce on Jan. 30, turned the tables on the Lions Saturday. The Lady Chaps opened the game on a 12-3 run as TAMUC missed their opening eight shot attempts. Alexsis Bryant was the only Lions player having any offensive success in the opening quarter. She had seven of the team's nine points in the opening quarter, as LCU led 14-9 at the close of the quarter.

The Lady Chaps had the final field goal of the quarter, and followed by opening the second quarter with the first 13 points of the frame for a 15-0 run. Ashton Duncan connected on a pair of three-pointers in the scoring binge, which put LCU up by 18 points (29-11 with 5:31 left in the second quarter).

The Lions, who did not receive their first field goal of the game until 3:32 remained in the first quarter, went the opening 3:46 of the second quarter without a field goal. TAMUC were 3-of-20 (15.0%) from the field before making their first field goal of the quarter. They did have brief offensive success in the game, making four straight field goal attempts inside of four minutes in the first half. It came during a span in which TAMUC was 7-of-9 from the field. The final shot of the sequence cut LCU's lead to 34-26 with 7:39 left in the third quarter. TAMUC opened the half on an 8-0 run and took advantage of 10 consecutive field goal misses by LCU.

LCU scored 14 points in the final quarter and seven were from the free-throw line. The Lions were in the same boat. They had nine points from the line and were held to two field goals in the quarter. TAMUC was 3-of-33 (9%) from the field over the game's final 17 minutes, but despite the sluggish shooting, they benefited from trips to the free-throw line and twice cut their deficit into single digits in the fourth quarter. Juliana Robertson had a field goal with 1:06 remaining to put the lead at 11, and Ashton Duncan hit her fourth three-pointer of the game inside the final minute to put LCU up 12 points (55-43).

There were a lot of streaky runs by both teams in the game. LCU had trouble with a TAMUC run in the third quarter, as LCU missed 10 consecutive shots from the field. Once TAMUC cut the deficit to 36-31, LCU, who registered their first field goal of the quarter six minutes into the frame, closed the quarter on a 7-0 run and led 43-31.

LCU received a solid performance from Maddi Chitsey. She produced her second double-double of the season against TAMUC and her third overall on the season (the first in a victory). Chitsey had 17 points and 11 rebounds, while also posting four assists, four blocks and four steals. She contributed a +21 plus/minus. LCU also received 12 points from Ashton Duncan and 10 points from Allie Schulte. Duncan nailed four three-pointers in the game and Schulte posted six rebounds, five assists and four steals.

The Lady Chaps claimed their first LSC Championship title, even in their first season in the LSC after four seasons in the Heartland Conference, where LCU won three postseason conference tournaments and received three automatic bids to participate in the South Central Region Tournament. LCU is 14-1 in conference-postseason play since joining NCAA Division II.

LCU will host the South Central Region Championships for a third time outright. Last season, due to the split scheduling, LCU was able to win in Grand Junction, Colo. and the title game was played at home against Angelo State (the region title game was the only game played in Lubbock).

The first game for the Lady Chaps in the tournament is set for Friday, Feb. 13 at 6 p.m. No.1-seed LCU will face No.8-seed Angelo State inside Rip Griffin Center. Tickets will go on sale to the general public Monday online at 5 p.m.