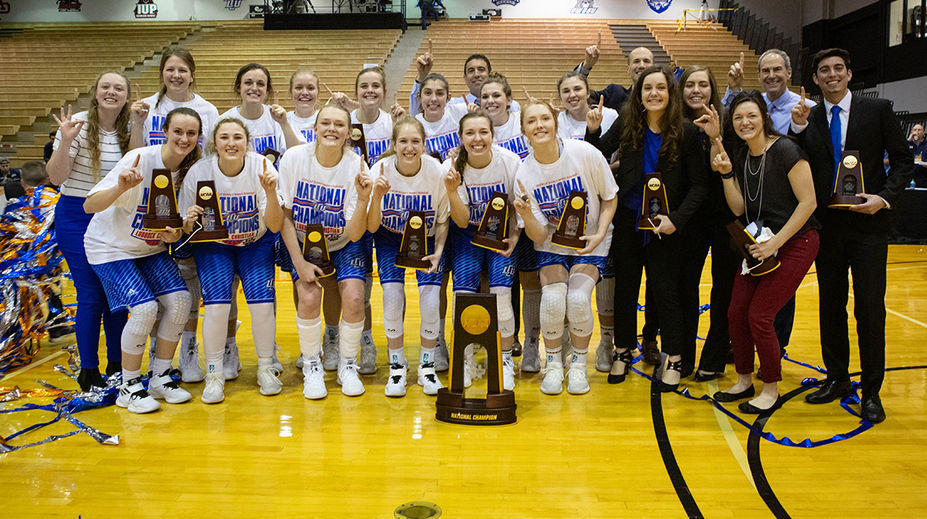 Following their upset of previously undefeated Drury University to advance past the semifinals, the Lady Chaps prepared for the championship matchup with Southwestern Oklahoma State University (SWOSU). The contingent of fans who made the 20-hour drive from Lubbock were determined to be heard inside the loud Alumni Hall, despite the larger crowd who made the shorter trip from Oklahoma, including their cheerleaders and a rowdy student section.

To LCU fans’ delight, the Lady Chaps started off hot, beginning the game on a 10-0 run, but the Lady Bulldogs soon fought their way back, and from then on, the game was close. There were several lead changes, momentum swings, and clutch plays from both teams, but toward the end of the game, one outshone them all.

Having forced the game to enter overtime, SWOSU led for the first four minutes of the period. LCU managed to claw back to a one-point lead with 35 seconds left, but SWOSU returned with a bucket of their own, and then another two points off an LCU turnover. With just 11 seconds remaining, the SWOSU crowd began to chant “We believe!” celebrating a solid three-point lead as LCU called a timeout, and Coach Steve Gomez began to draw up a designed play.

The LCU faithful stood and cheered hopefully as their team took the floor, and when the whistle blew, the team executed their play, giving senior Olivia Robertson an open 3-point shot. The ball ricocheted off of the backboard, but Allie Shulte grabbed the offensive rebound, and passed it to an open Maddi Chitsey on the right wing. The junior stepped back behind the three-point line and inside the arena, time seemed to slow down as the shot connected with two-and-a-half seconds left. The LCU crowd erupted with cheers as the Lady Chaps forced the first-ever double-overtime contest in the history of women’s NCAA national title games—on any level.

A deflated SWOSU attempted to open the second overtime as they did the first, with a three-pointer, but their first two attempts were unsuccessful. They ended up missing their first seven shots, which LCU capitalized on, silencing the shocked SWOSU crowd. The Lady Chaps, who closed the game making their final five field goal attempts, received a jumper and three-point from Robertson, igniting a 10-0 run. The Lady Chaps cruised from there, outscoring the Lady Bulldogs 20-10 in the second overtime.

As the final buzzer sounded, the team and contingent of LCU fans stormed the floor, celebrating the spectacular win, and the crowd gathered at the watch party in the Rip Griffin Center back in Lubbock erupted in a similar fashion.

The victory marked LCU’s second National Championship in its four years of NCAA Division II play, bringing their overall NCAA postseason record to 16-1. The team returned home to Lubbock after a week on the road Saturday afternoon to a warm reception by fans at the airport, and an official public celebration will take place Tuesday, April 2 in the Rip Griffin Center at 5:30 p.m.