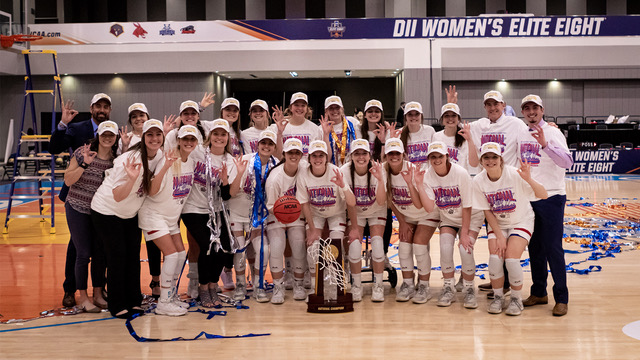 As Lubbock Christian University fans filed into the Greater Columbus Convention Center for the NCAA Division II National Championship, there was a sense of familiarity—this team, and many of these very players and fans had been here before. For the third time since LCU joined Division II just six years ago, the women’s basketball team was playing for the national title. As the national anthem was played, spirit and expectations were high—and the only two teams who’d held the number one national rank in the season faced off in the final game, which was itself a rematch between the two teams from the semifinals in this same tournament in the same city just two years before.

LCU came out of the gates strong building an early 19-8 lead, making five of their first seven three-point attempts going into the first timeout and gathering three steals. The offense stagnated for the remainder of the quarter until Laynee Burr drained a three-pointer at the buzzer, reigniting the LCU fans, and the Lady Chaps ended the first period up 22-12. 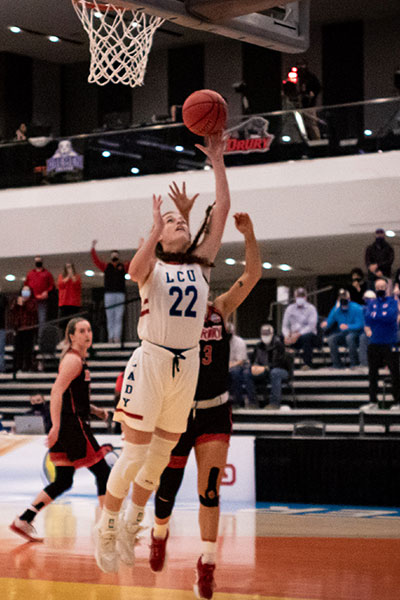 LCU's tight defense continued to stifle the Panthers, but the Lady Chaps' offense also sputtered in the beginning of the second period, and the game stayed tight going into the media timeout, with LCU’s lead sitting at 28-18. After missing a three-point shot, Drury’s Payton Richards came down on her ankle and tumbled to the floor, and Allie Shulte was called for the foul. After a minute of silence as she was helped off the floor, Drury made two of their three free throws. For the rest of the quarter the two teams traded buckets, and at the final buzzer of the first half, LCU’s lead was 32-24—though it could have been much larger as the Lady Chaps uncharacteristically missed 2 of their 6 free throws.

The atmosphere was tense as the teams warmed up for the second half of play—while LCU had the lead, momentum seemed to be against them, and they would need to step up their game in the second half to defend their title. The two squads traded buckets for the opening minutes of the quarter, and it was clear—each team was putting everything they had into playing for a national championship. At the end of the third quarter, LCU’s lead had swelled to 51-38—only one point shy of their largest in the game, and they would get the ball to start what could be the final ten minutes of the season.

The LCU crowd was loud as they inbounded to an easy bucket for Juliana Robertson, and LCU began to tighten up their defense. The offense kept on cranking, and the lead grew to 15, 19, and then 21. Lady Chap fans were on their feet—they could feel the energy in the room surging—but LCU couldn’t let their foot off the gas. With a quick seven-point run with 4 minutes left to go, Drury made sure the Lady Chaps knew they weren’t going to have it easy, cutting the lead to 60-46. The Panthers followed the media timeout with another quick five points, and with 3:14 left, LCU’s lead had dwindled to just nine points. With just under two minutes to go, Drury could taste blood in the water, and Paige Robinson made a long three-pointer—only six points separated the two teams. For the first time since the opening minutes of the game, Drury’s fans were the loudest in the room as the national title seemed just within reach—their comeback was in full-swing. Once again, the game would come down to LCU’s defense. 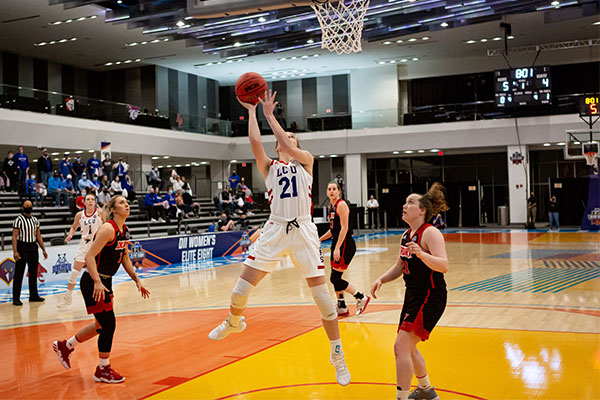 With 1:17 left in regulation, Allie Shulte was fouled and made one of the free-throws, but Drury answered with a three-pointer, further cutting the lead to just four–but those points would be Dury’s last of the season. To start the final minute, the Lady Chaps hit a pair of free throws and then locked down on defense. Ashtyn Duncan came up with a big steal and followed it up with a free throw to widen the gap to seven with just 37 seconds in the quarter. LCU made another strong defensive stop and regained possession of the ball as the clock now neared 30 seconds. As the possessions went back and forth, Drury was forced to foul and LCU’s defense held tight, and when the final buzzer sounded, the Lady Chaps stood victorious, winning 69-59.

LCU’s fans exploded with pride as their team stormed the court, hugging beneath confetti as the individual and team trophies were presented. Emma Middleton, who earned a double-double on the night, was named to the All-Tournament Team, and Allie Shulte was awarded the Tournament MVP, posting 18 points for the Lady Chaps in the championship game. The team cut down the nets, posed for photos, and celebrated an incredible 2020-21 season.

With a perfect 22-0 record, the Lady Chaps successfully defended their national title and became the only NCAA women’s basketball team ever to complete two perfect seasons. Since joining the NCAA Division II, LCU has won the women’s national title more often than not and owns an immaculate all-time Elite Eight Tournament record of 20-1. In just six years and five postseasons in DII, Steve Gomez has joined only fourteen other coaches across the entire NCAA (four in Division II) in winning three or more national championships over their career.