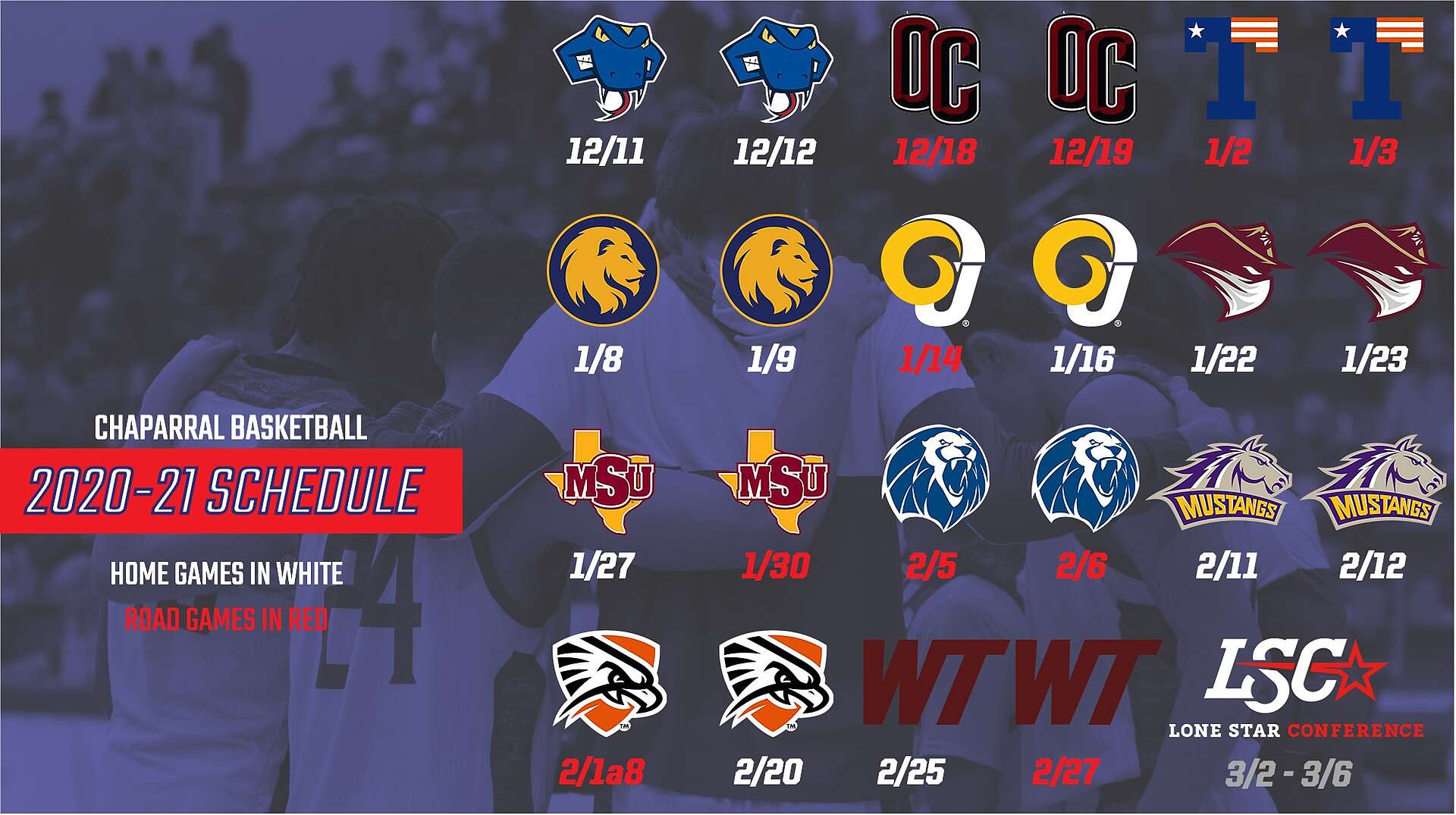 The Lone Star Conference released the 2020-21 men’s and women's basketball schedules on November 23, which makes up 20 of Lubbock Christian University's 22-game schedule, and has LCU tipping-off December 11 inside Rip Griffin Center against St. Mary's. Monday, LCU finalized a portion of their schedule with the addition of their non-conference games and the announcement of home game times.

This year, 15 men's and 15 women's teams will compete in three divisions (North, South and West) consisting of five institutions each. Each team is scheduled to play 20 conference games with divisional and crossover competition throughout the year. During weeks in which a team plays a divisional opponent, each institution will have one contest at home and one on the road. When a team faces an opponent from outside its division, both crossover games will be played at the same site on back-to-back days.

The modified "bubble" schedule format enhances student-athlete safety with regard to COVID-19 and reduces the amount of contact amongst teams by playing the same opponent twice during the week.

The conference tournament will consist of the top eight men's and women's teams, with first-round games on-campus on Tuesday, March 2, followed by the four winning teams advancing to the final site at the highest remaining seed on Friday, March 5 and Saturday, March 6.

COVID-19 regulations by LCU will have the Rip Griffin Center at 50% capacity. Season pass holders will be notified of their seat assignments prior to the first home game. Student-athletes will receive their pass list (as usual), and an allotment of 100 tickets per game will be made available for general LCU students. All home game ticket and spectator policies are subject to change on a game-by-game basis. For games allowing fans, 300 tickets will be made available (admission covers both men's and women's games on that date) to the general public on www.lcuchaps.com/tickets.

The Lone Star Conference also announced details of a new hybrid pricing model for the LSC Digital Network beginning with the 2020-21 winter and spring seasons. The broadcasts of volleyball and men's and women's basketball games will be available via pay-per-view (PPV) conference-wide under the new model. Fans can purchase a $10 daily pass that will give them access to all LSC football, volleyball and basketball contests on the network that day, as well as access to previously aired games from the current season for 24 hours. In addition to live and archived streaming options, viewers will have the option to purchase and download games from the 2020-21 season for $10 each. Select games of all other sports carried on the LSC Digital Network will be available free-to-view (FTV) or PPV at the discretion of the broadcasting institution. The LSC Digital Network is in its second year showcasing the academic and athletic events of the league and its 18 member institutions. Fans can watch games and purchase passes online at www.lonestarconferencenetwork.com on computer and mobile devices. Viewers can also tune in to games on the LSC Digital Network via OTT apps available on Apple TV, Amazon Fire TV, Android TV and Roku by searching for "LSC Digital Network."

The men’s team returns much of the 2019-20 team, which had successful 19-10 showing a year ago that ended in the Lone Star Conference Tournament Quarterfinals. The Chaps averaged 77.2 points per game last season while holding opponents to 71.2. Their top three scorers from the team – Lloyd Daniels (16.2 ppg), Parker Hicks (14.0 ppg) and Ty Caswell (11.2 ppg) are all back for the 2020-21 campaign, ranked third in the conference in preseason polls.

The Lady Chaps rounded out last season with their first LSC title ending the campaign 28-3 before the NCAA Division II postseason was canceled due to COVID-19, and have fielded a strong freshman class going into the 2020-21 season. The women's team was ranked at the top of the Lone Star Conference to start the season, and have been ranked the number 3 overall team in the nation in preseason polls.