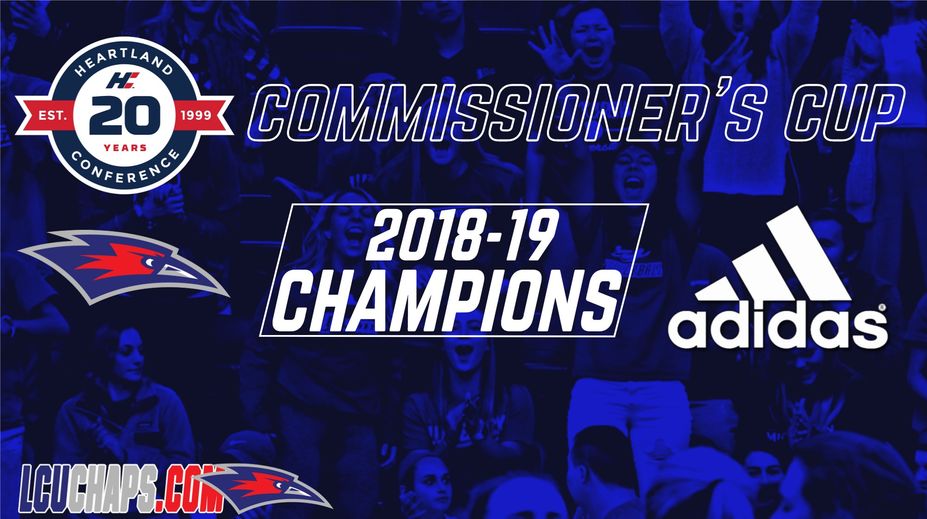 Lubbock Christian University claimed its first Heartland Conference Commissioner's Cup presented by Adidas. The Chaparrals and Lady Chaparrals athletic programs finished the season with an average of .683 following the spring championships this season.

Lubbock Christian's conference championship in baseball put the Chaparrals over the top in the race for the commissioner's cup. LCU was also buoyed by a fourth-place finish in softball, and a sixth-place finish in men's golf. The Chaps had already built a sizable lead heading into the spring season thanks to conference titles in both women's basketball and volleyball and second-place finishes in both men's and women's cross country.

DBU finished second for the first time in the four-year history of the commissioner's cup. The Patriots had won the title each of its first three years. DBU made a late push to claim a fourth commissioner's cup race with a conference championship in women's golf, but were unable to make up the .100-plus point deficit they faced entering the spring season.

St. Mary's moved from fifth to third marking its second-highest finish in the commissioner's cup. The Rattlers improved their average by almost .100 points to .656 thanks in large part to a share of the conference championship in softball. The Rattlers also finished inside the top three in both men's and women's golf.

St. Edward's finished just behind their rivals with a .651 average following the spring season. The Hilltoppers finished top four in men's and women's golf and baseball to stay comfortably inside the top four for the third time in four years.

Oklahoma Christian's stellar spring season bumped the Eagles from ninth to fifth marking the highest finish in the commissioner's cup standings in program history. OC won conference titles in both softball and men's golf and finished second in women's golf to finish with an average of .523 on the year. The Eagles were nearly .200 points behind that entering the spring season.

Rogers State also finished with an average of .523 tying for fifth in the standings. The Hillcats finished top three in both softball and baseball to improve their average .032 points from the end of the winter season.

About the Heartland Conference Commissioner's Cup presented by adidas®

The Heartland Conference Commissioner's Cup sponsored by adidas® was instituted prior to the start of the 2015-16 season and honors the top athletic institutions within the conference. adidas® has sponsored the cup since the award's inception last season.

Commissioner's Cup points are awarded to institutions based on their finish within the conference's 13 sponsored sports. Based on the number of institutions participating in each sport, available points will vary. Regular-season standings are used for baseball, basketball, soccer, softball and volleyball, while results of conference championship events are used to determine points in cross country and golf. In order for points to be awarded, there must be at least six schools competing in a sport.

Standings are updated three times per year following the completion of fall, winter and spring sports. This is the final award given, as this season closes the final season of the Heartland Conference, which completed it's 20th anniversary season. LCU will compete next season as members of the Lone Star Conference.