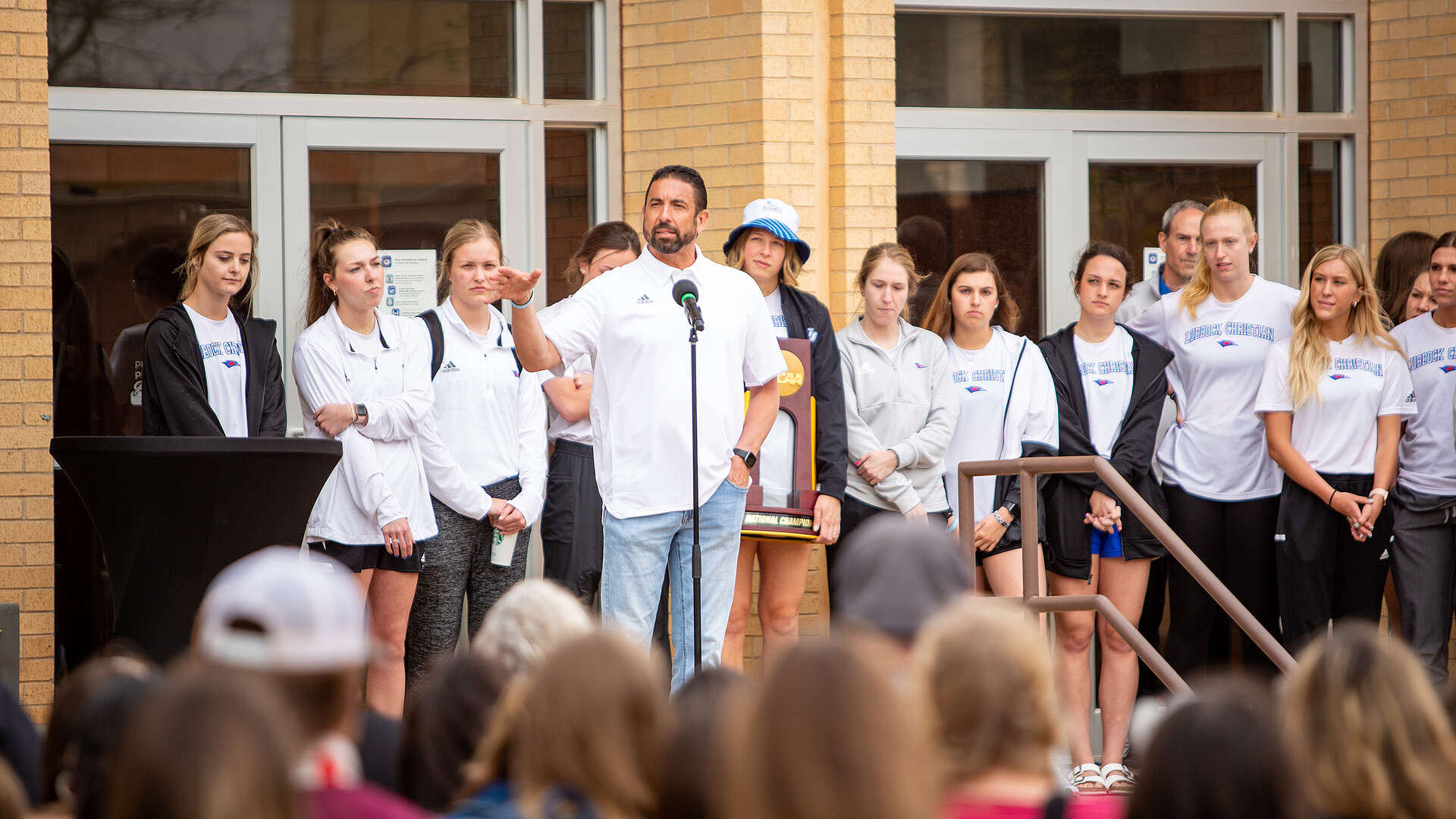 For the past week, the LCU and Lubbock communities have been abuzz with excitement as the Lady Chap Basketball Team brought the national title home to Lubbock for the second postseason in a row. The undefeated team was welcomed back to Lubbock with a police escort and cheering crowd at the airport when they arrived home from Columbus, Ohio—the site of the 2021 NCAA Division II Elite Eight Tournament.

The celebrations continued as students, faculty, staff, and fans gathered in the mall area of LCU’s campus Monday morning to host a parade celebrating the team. The Big Blue Basketball Band played stands tunes as the LCU Cheer squad led the team down the main sidewalk in the campus mall stopping on the steps of the McDonald Moody Auditorium, where LCU President Dr. Scott McDowell, Lubbock City Councilwoman Latrelle Joy, and Lubbock Mayor Dan Pope waited to congratulate them.

Head Coach Steve Gomez said a few words to the community, and then presented the NCAA Championship Trophy to Dr. McDowell.

The morning celebration closed with the Mayor reading a proclamation that Monday, April 5, 2021 would be known as Lady Chap Day in Lubbock, Texas as a celebration and recognition of the team’s outstanding achievement.

“We are so proud of this team, and this accomplishment,” Mayor Pope said. “These young women represent LCU well, and they represent the city of Lubbock well.” He later added, “The Lubbock Christian University Lady Chaps and their head coach Steve Gomez are to be commended for an extraordinary season, a third national championship, and cultivating a culture of excellence at LCU, even in the face of adversity during the COVID-19 pandemic.”

LCU is also hosting the Lady Chaps Community Celebration—“an inside look at the undefeated Lady Chaps”—on Thursday, April 8, inside the Rip Griffin Center.  The sold-out luncheon is sponsored by Tyler Technologies, and proceeds will benefit the Lady Chap Basketball Endowed Scholarship. Featured during the lunch will be exclusive conversations with Coach Gomez as well as senior members of the team.