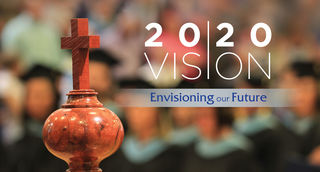 LCU publicly announced the launch of the 20|20 Vision Campaign, Feb. 13 at the Forever Blue: Family Celebration on Homecoming Weekend. The campaign, which is the largest and most ambitious in LCU history, seeks to raise $60 million to improve aspects of the university that will amplify LCU’s ability to change lives. Prior to the public launch, LCU raised 73% of the campaign goal.

“The 20|20 Vision Campaign comes at a critical moment in the university's history,” said LCU President Tim Perrin. “We are deeply grateful for all those who are investing in our future and advancing our mission of changing lives. Together we are writing the next chapter of LCU's story.”

President Perrin announced the campaign to the 900 alumni in attendance at the Family Celebration. The program of the evening was led primarily by committed campaign leaders, including Bill Bundy (’83), Terry Creech (’81), Tia (Walters) Clary (’96), Emily (Potts) Ratcliff (’72), Kyle Bullock (’13), and Larry Hays (’64).

Prior to the public announcement, the campaign was in a silent phase. During this phase, campaign leaders committed funds, the faculty and staff of LCU raised their own contributions, and several significant donations were made for various aspects of the campaign.

In total, the silent phase raised $43.9 million, just over 73% of the total goal. The faculty and staff campaign surpassed a victory goal of $650,000, reaching $822,066 in contributions. Al and Pat Smith gave $5.7 million, the largest single gift by individuals in LCU history, to endow the College of Biblical Studies and fund renovations to the C.L. Kay Christian Development Center. Other significant contributions during the silent phase include The Rhodes Family Institute for Undergraduate Research and the Bundy Faculty Development Endowment Fund.

“The silent phase of the campaign was met with an incredible response,” said Raymond Richardson, Vice President for University Advancement. “So many have come along side LCU to produce the results we have seen in these early stages of the 20|20 Vision Campaign.”

Following a lengthy period of consultation and conversation, the university mission statement has been re-articulated to better reflect LCU’s identity as a Christian university and the centrality of transformation in work on and off campus. The core message remains the same, and the revised mission statement reads, “Lubbock Christian University is a Christ-centered, academic community of learners, transforming the hearts, minds, and hands of students for lives of purpose and service.”

Honoring LCU’s reiterated mission and vision, the 20|20 Vision Campaign prioritizes improving the university experience and its impact on students. The campaign will address this goal through four focused objectives built around students: academic excellence, community, endowments, and future momentum.

Initiatives that will achieve these objectives include the construction and renovation of campus buildings that will add academic space and update student housing; the improvement of LCU athletic facilities; annual funding for student scholarships, faculty development, and academic programs through endowments; as well as improvements to the campus, technology, infrastructure, student life, and departments.

Effects of the campaign are already evident on campus with the completion of the Margaret Talkington Center for Nursing Education. Additionally, construction on the James and Jeanette Ling Science Center and renovations on the C.L. Kay Christian Development Center are expected to be completed by Aug. 2017.

Richardson is excited by the positive community response to the campaign and what this success will mean for the university. “This campaign is driven by the LCU community and the ownership is the alumni, faculty, staff, friends, donors, and our community,” he said. “The LCU community has been prayerful about this campaign and God continues to honor the work of so many, not for the benefit of any individuals but for the benefit of His kingdom, lived out right here on the campus of LCU.”