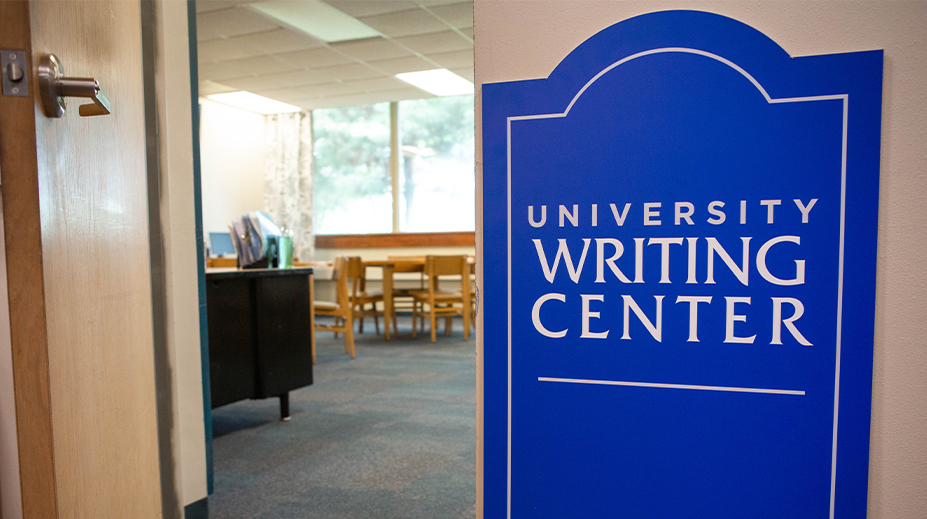 LCU’s University Writing Center celebrated its 10-year anniversary this year at LCU’s Homecoming, but as members and friends gathered together, none could have imagined then that the entirety of campus would moving from face-to-face conversations with students to hosting those student consultations online.

“And yet, here we are,” said Dr. Jana Anderson, Director of the University Writing Center (UWC), whose words echo the attitude of many concerning the challenging, unforeseeable state of the world during the COVID-19 pandemic.

Even amid the vast challenges that such a move would make, Anderson knew that the services provided by the UWC were too essential to restrict amid the new social distancing policies, and the decision was made to bring all UWC activities online.

“Thanks to our partnership with LCU’s IT department, and specifically to the heroic efforts of Jeanna Morton, IT Specialist in Technology Services, who spent several days and countless hours getting the UWC fully prepared to launch online, the University Writing Center was “open” for business the same day that LCU students began their distance learning season at LCU,” she shared.

“The University Writing Center is staffed by LCU students, and both the student-led staff and the university students have navigated the learning curve, largely due to their collective growth mindset and their willingness to persevere, understanding that we all have limited options and that we all are committed to student success.”

As the director of the University Writing Center, and as a full-time English professor in the department of Humanities, Anderson initially hesitated to moving the UWC team online, knowing that she was asking the UWC student team to adapt to these changes so quickly, while simultaneously trying to gain their equilibrium as distance learning students themselves. “However, once I fully understood that distance learning was the only option and that we weren’t returning to campus, we all embraced the decision and we have moved forward, full steam ahead.”

As with any major shift in service, the transition has not been without difficulty. “There is, in fact, a learning curve,” Anderson explained, “which includes learning new technology but also trouble-shooting unexpected problems.” Additionally, the student staff has had to learn to use some online editing tools that are unwieldy and unfamiliar.

“Because most of my appointments have been written feedback only, I definitely miss being able to see the student’s face and gauge how they’re responding to my suggestions,” shared Abby Langford, a student working at the UWC. “It’s difficult not being able to ask them what they meant or if a change that I made stays true to what they’re trying to say.”

Caleb Ward, one of Langford’s coworkers, shared a similar experience. “Although my experience transitioning to online consultations was not difficult, it is occasionally awkward. There is a sense of comfort coming from physical awareness and responsiveness that is lost virtually.”

“We have all lost the sense of community that we have worked so hard to foster over the years in our physical space,” Anderson explained. “There is a distinct advantage to being able to have a face-to-face conversation with students, and the consultations now feel less personal, even when using LifeSize—the virtual meeting space provided to the LCU campus community.”

Even as the shift to the online format presented numerous challenges, Anderson praised the efforts and successes of her team.

“The Writing Center student consultants did just what I expected them to do: they collectively rose to the occasion,” she lauded. “Not a single one issued a word of complaint, which I think is amazing and speaks to their character and maturity. Each one came forward with a ‘What can I do to help?’ and ‘I’m going to do my very best’ attitude. They have done exceptionally well, and we are all thinking about what parts of this model we can utilize on behalf of our students in the upcoming semesters.”

Working online has even had some advantages, as Rachel Ghormley, another student staff member of the UWC, explained. “I don't have to worry about trying to rush working with a student to fit into a 30-minute session and can respond papers whenever I have time. I also have more time to work now, which helps me to devote more time to helping students.”

Her colleague, Luke Shelburne, agreed. “I would say the best thing about moving to online consultations has been increased flexibility with scheduling.”

“While I definitely thought that the transition to online for the writing center would be smoother than it actually was in my case, overall it has been a good experience to grow and adapt to new changes,” shared Landon Camp, a senior member of the staff. “Working in the writing center is all about helping students become better writers and to foster them along in their writing process journey, and while it took a little extra effort and work to pass the initial learning curve, I believe that we, as a writing center staff, have fulfilled our duties to students in the best way we can as we continue to serve them throughout the remainder of the semester.”

Above all else, however, each member of the UWC praised Anderson’s leadership, and the efforts to make the new, challenging vision a reality.

“The transition from in-person to online consultations was surprisingly simple because of the wonderful help we’ve had from Professor Anderson and Jeanna Morton,” said Stella Oliver.

“The transition was not an easy one,” added Madison Wheeler. “I know that Jana Anderson spent countless hours with Jeanna Morton, hashing out all of the details of what an online Writing Center would look like. We, as consultants, were able to hit the ground running because Jana and Jeanna pioneered the way for us.”

“I believe the transition of the Writing Center to an online format is one of the most beautiful things that I have seen, and been a part of, during this unexpected season,” Wheeler continued. “Jana, and the rest of the Writing Center staff, remind me daily what it means to be resilient; what it looks like to not only handle what life throws at you, but make it into something good.”

“We have learned a great deal, and we are trying to embrace what we’ve learned, rather than mourn what we’ve given up,” said Anderson of the team’s attitude.

Wheeler’s final thought drives home the true power of the team’s effort: “Overall, more than anything I am thankful to be a part of a team that doesn’t lay down when things get tough, but rises to the challenges that are set before us.”