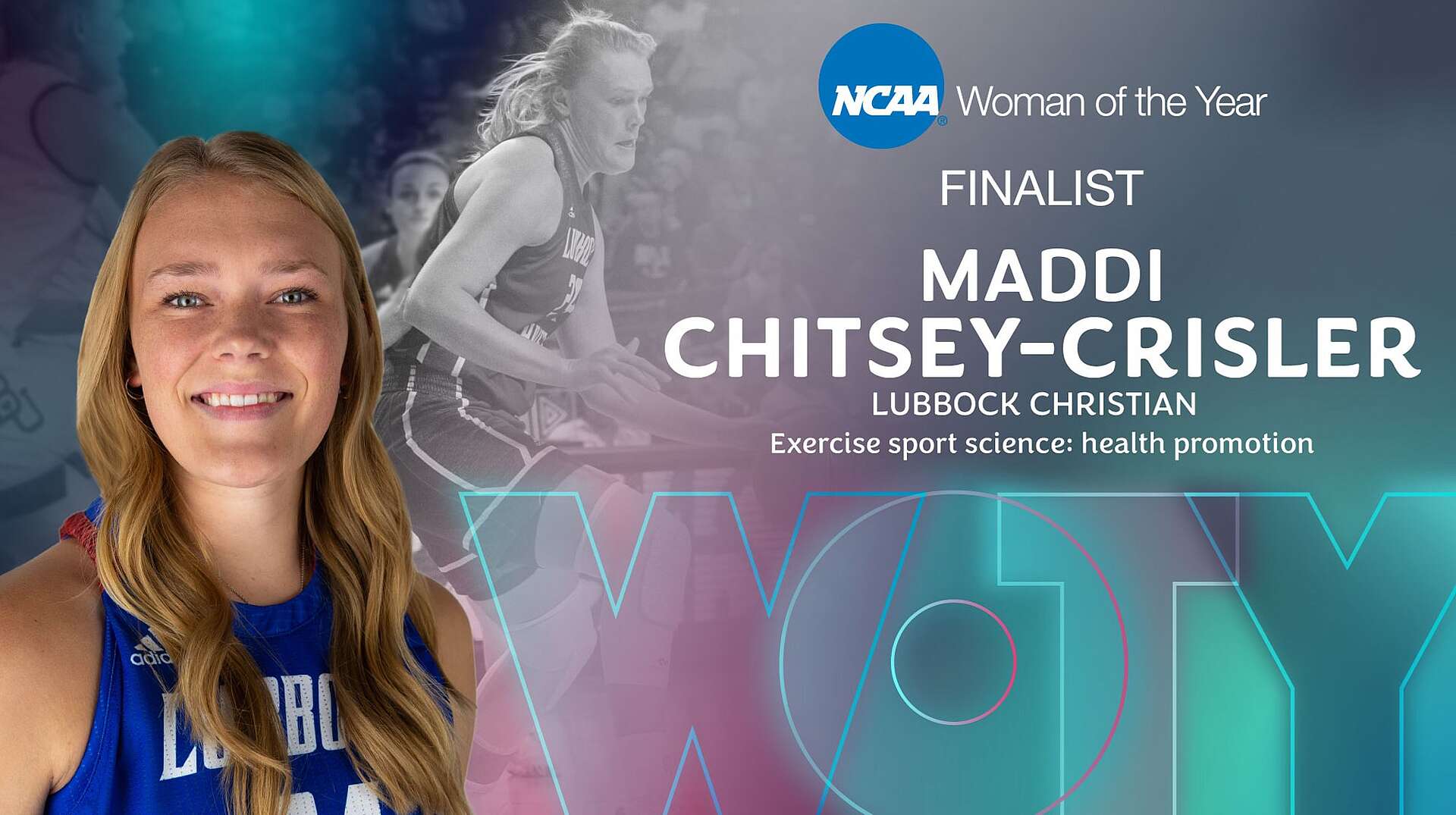 The Woman of the Year Selection Committee has trimmed the finalists of the 2020 NCAA Woman of the Year Award from 30 to nine, and remaining a finalist is former Lubbock Christian University women's basketball forward Maddi Chitsey (Crisler). The nine finalists, three women from each NCAA division, were selected for their outstanding achievements in academics, athletics, community service and leadership, and one of them will be awarded the NCAA's most distinctive annual honor for female student-athletes.

Chitsey was chosen from the Top 30 Woman of the Year honorees, made up of 10 honorees from each division and 14 sports, including two emerging sports. In 2020, schools nominated 605 graduating female student-athletes for this prestigious award. The finalists and Top 30 honorees will be celebrated and the 2020 NCAA Woman of the Year will be announced during a virtual awards show Friday, Nov. 13. The show will be streamed on the NCAA Twitter account and ncaa.org/woty, and it will be streamed by ESPN.

"Being a collegiate women's basketball player at Lubbock Christian University has altered my life in the most positive and beautiful way that I could have ever imagined, stated Chitsey, in a comment she provided the NCAA. "Not only did I get to play the sport I love, but I got to gain an amazing education at a university that cares deeply about their students."

Of the remaining nine finalists, Chitsey is one of two women's basketball student-athletes. Chitsey wrapped up her senior year by earning a pair of the league's highest honors, receiving the LSC Academic Athlete of the Year (all sports) and LSC Female Athlete of the Year. The Exercise Sports Science major (also the LSC Women's Basketball Academic Player of the Year honor) graduated with a 3.94 GPA, and was also recognized by the LSC as LCU's female Scholar-Athlete award winner (all-sports). Chitsey, from Wall, Texas, adds to her collection of honors completing her senior season (13 awards received her senior season). During the season alone, she also earned the honor of being named to the WBCA and D2CCA All-America Team, All-Texas Team (Dave Campbell's Texas Basketball), All-South Central Team, as the South Central Region Player of the Year (D2CCA), LSC Athletic Performance Team member and she was the first player in Lone Star Conference history to claim the conference's Player of the Year, Defensive Player of the Year and Academic Player of the Year honors in the same season. The returning D2CCA All-Region Selection is best known for her overtime three-pointer in LCU's 2019 NCAA Division II National Championship victory over Southwestern Oklahoma State, which led to All-Elite Eight Tournament Honors. She led LCU in scoring (13.5), ranking eighth in the LSC. Chitsey also ranked fourth in the LSC in field goal percentage (46.7%), sixth in blocks (58) and blocks per game (1.9), seventh in field goals made (154) and defensive rebounds per game (4.8) and 10th in free-throw percentage (74.8%). She ranked second on the LCU squad with a per-game plus/minus rate of +16.9 (+17.5 in conference) and is part of a Lady Chaps defense that finished the season leading the nation holding opponents to a 31.7% shooting mark. Chitsey was a LSC All-Tournament Team selection, helping LCU to a LSC Championship title in March. During the summer, she married former LCU basketball player Silas Crisler.