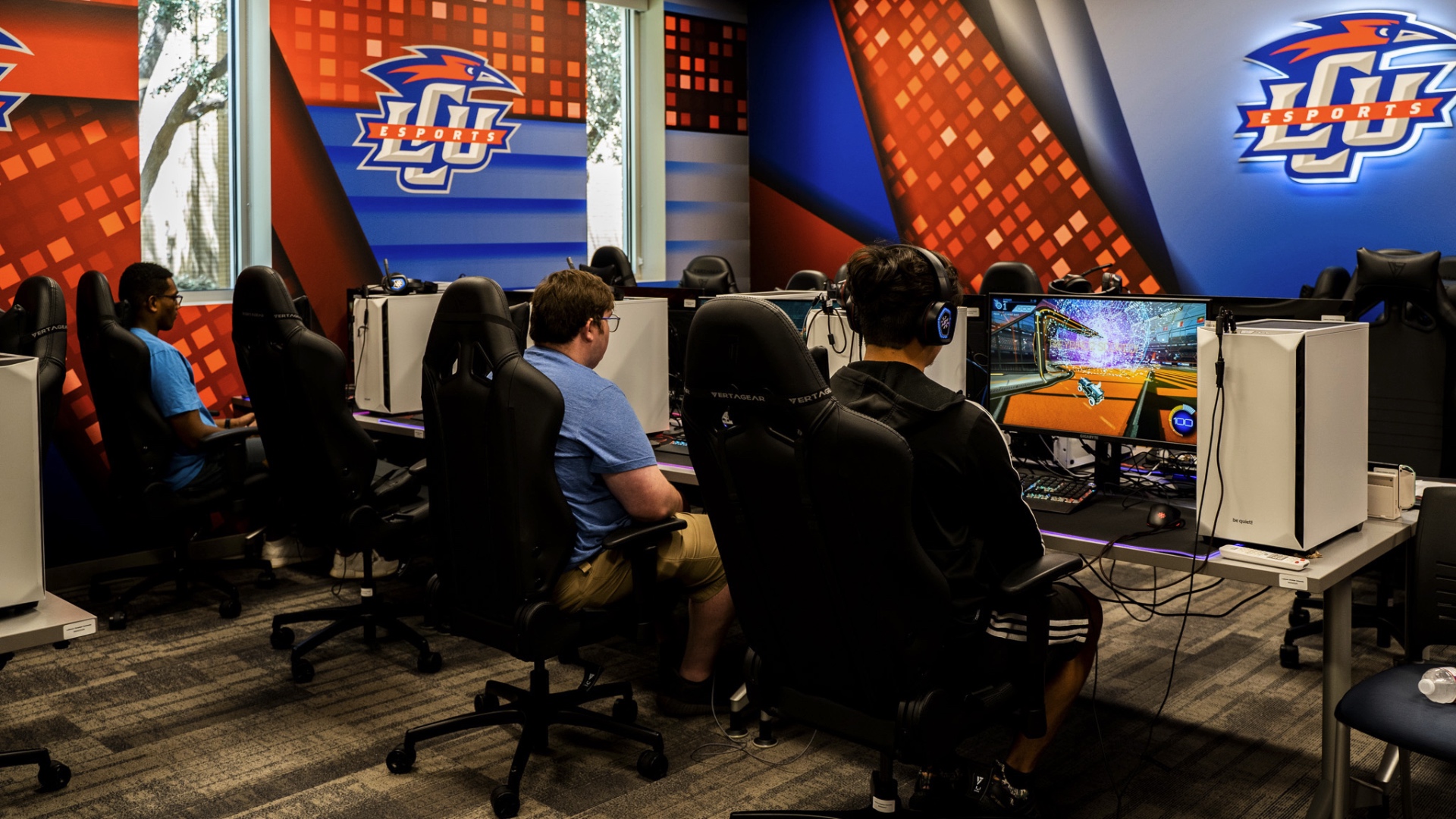 Lubbock Christian University’s (LCU) most recent addition to its athletic department has found widespread support in its inaugural year from the campus community.

The Esports program—one of only five varsity Esports programs in the Lone Star Conference—was announced in the fall of 2020 and is one of three non-NCAA sports in which LCU competes. Following the appointment of head coach Noah Flint, the process of building the program surged forward with the goal to begin competition in the fall of 2021. This included not only readying competitive and practice spaces for the program, but also recruiting and building up rosters for competition.

“The first week of classes this fall, we had a general interest meeting for anyone who wanted to attend,” Flint explained. “We had so many people show up that we had to move from the classroom we’d planned to use to the City Bank Commons in the Dobbs Center for Business. We had students not only interested in competing, but also others who just wanted to find a way to be involved."

“Our varsity rosters currently compete in six games: Valorant, Overwatch, Rocket League, League of Legends, Super Smash Bros, and Apex: Legends,” He continued. Because the program is new to LCU’s campus, Flint was able to draw from both incoming recruits and current students to fill those positions. “Between those six games, we have 22 spots for varsity players.”

“One of the really great things we’re able to do with the Esports program is to build a lot of additional opportunities for our students outside of the arena. We have talented students helping us with stream design, stream overlay, production, commentary, and graphic design, among others—and these are all things that those students can put in their portfolios and add to their resumes.”

As surprising to Flint as the community interest has been, the level of investment in the program by the LCU on the university level has been equally encouraging.

“I didn’t expect it all to move this quickly,” he confessed. “Starting the program from scratch, I expected to be tying up all kinds of loose ends throughout this semester—but everything was finished during the summer. All the work on our arena, from the wall wraps and graphics to the electrical that had to be adjusted to handle the hardware—even the purchasing of the machines themselves—was done so quickly and professionally. It’s been amazing.”

Flint came to LCU with Esports experience in numerous other programs and locations across the state, and the backing he’s felt from LCU has been impressive. Many colleges and universities don’t have any version of an Esports program, and even among those who do, that presence is often only in the form of a club or intramural capacity.

“You really don’t see this level of professional commitment to an Esports program in West Texas—in fact, I haven’t seen it anywhere else.”

LCU’s Varsity E-sports teams have already competed in several matches across multiple games, with very favorable results – including several victories. Each competition is livestreamed on the LCU Esports Twitch channel.

Check out the Esports roster, schedule, and more on their webpage.