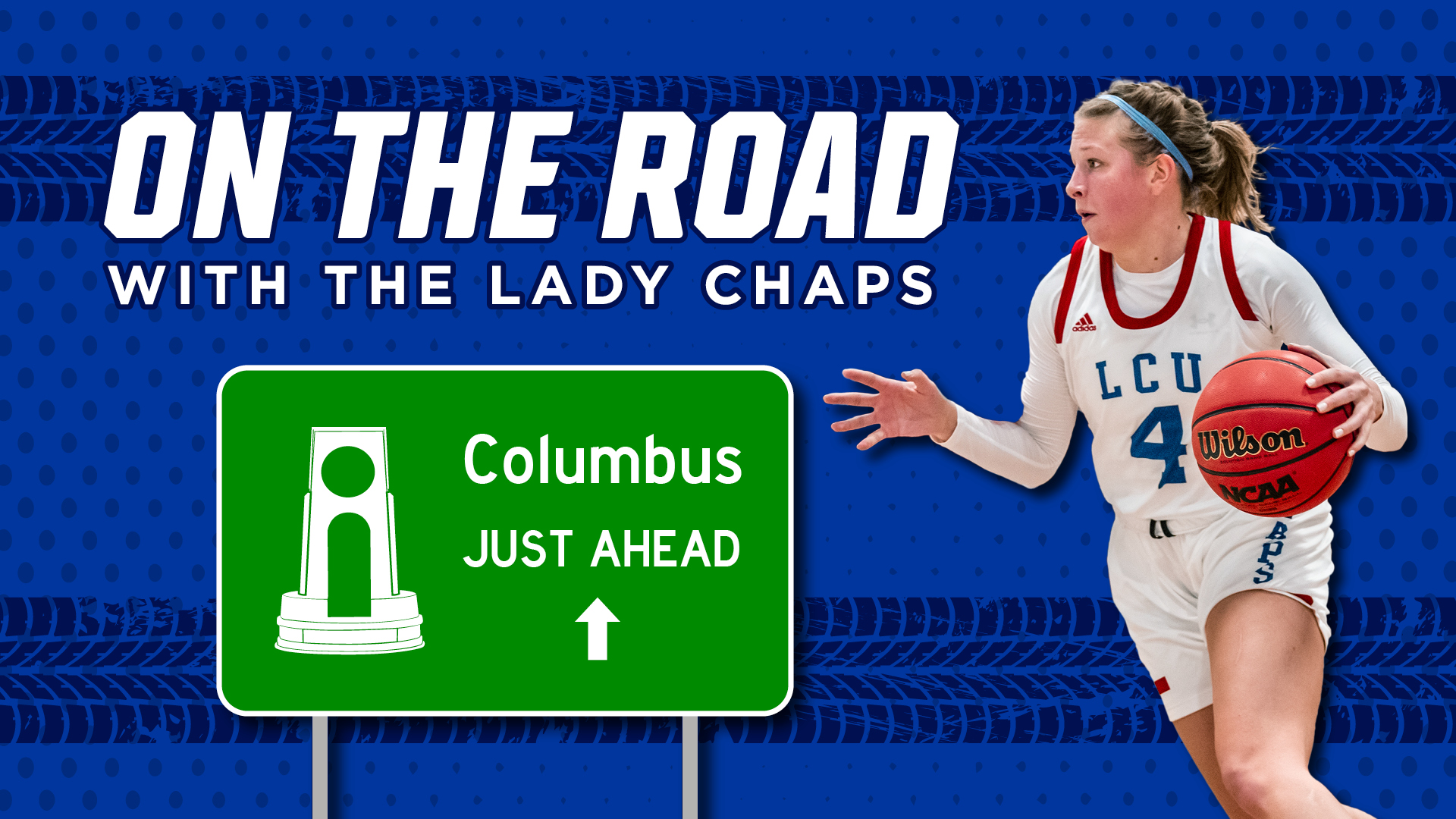 On the Road with the Lady Chaps

The home for the Lady Chaps' run in the NCAA Division II Elite Eight Tournament.

The top-seeded Lady Chaps come into the final stretch of the 2021 season with a perfect 20-0 record on the season, the only undefeated team in the nation, and due to the 2020 tournament being cut short due to COVID-19, the reigning national champions. The 2021 squad features several returning faces from the 2019 championship squad and looks to defend their title with a fury.

The Lady Chaparrals are a defensive nightmare with a slew of offensive weapons on the court, with an average margin of victory of 26.4 points per game, leading the country. The team holds a 32-game winning streak, with their last loss coming in January of 2020, and currently holds the record for longest home winning streak in the NCAA with a staggering 91-straight wins inside the Rip Griffin Center.

The 2021 Elite Eight Championship looks different than any before, however—the NCAA has enforced numerous COVID 19 precautions to ensure player, coach, staff, and fan safety throughout the tournament. These include a venue-wide mask policy, extremely restricted ticket sales, and regular COVID testing for players, coaches, and team personnel. 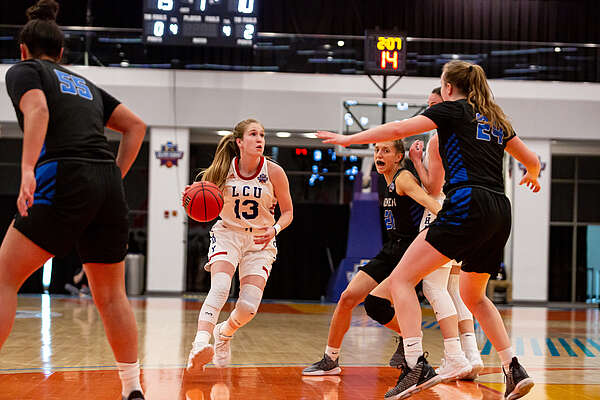 Their first test in the Elite Eight tournament came against Daemen College, who made their program’s first-ever appearance in the national championship series. The eighth-seeded team, the 14-2 Wildcats feature a stifling defense to rival LCU’s own, as they held opponents to a measly 32 percent shooting on the year.

Though the crowd was intentionally slim in the arena, the Lady chap faithful traveled well, cheering on their team inside the sparsely-seated Battelle Ballroom inside the Greater Columbus Convention Center. Each team was only allotted 36 tickets for fans to attend the games, so the crowd for each team was spaced out to allow for social distancing.

As the third contest of the tournament day began, LCU won the opening tip, and Juliana Robertson scored the first quick bucket. A swift Daemen turnover led to their first foul and eventually Ashtyn Duncan’s first three-pointer of the night. LCU’s first-team all-American Allie Shulte followed up with a pair of free-throws to put LCU up 7-2, but Daemen responded with a three pointer to close the distance to 2. A Maddie Turner 3 and another from LCU’s third-team all-American senior Emma Middleton put LCU up 14-5 a little over halfway through the first quarter, and a Robertson block capped off LCU’s hot start into the first media timeout. Middleton kept grinding to a quick steal and bucket, but Daemen finally scored a pair of triples to keep the score tight at 15-10. A Duncan three kept the Lady Chaps up 6 going in the final possessions of the first quarter, which ended with LCU leading 20-14.

After a scoreless opening three minutes of the first quarter, Daemen responded with a bucket from Caroline White, cutting the lead to four. A Robertson miss and a foul by Turner led to a Wildcat free-throw, but LCU responded with a Turner putback. Middleton followed up with a couple of buckets, bringing the score to 25-19 with just under three minutes left in the first half. Channing Cunyus added three points on a long bucket, and a pair of misses from the Wildcats gave LCU the ball with under two minutes to go. Those two minutes would go without another bucket, however, and LCU would head into the locker room with a 28-21 lead.

The low-scoring halftime score illustrated the expected defensive battle, as the Lady Chaps only shot 34% from the floor over the game’s first twenty minutes, alongside Daemen's own low 28%. No LCU players had scored double-digit points in the half as Middleton led the Lady Chaps with 9 points, though Daemen's Caroline White entered the locker room with 11, leading the Wildcats. 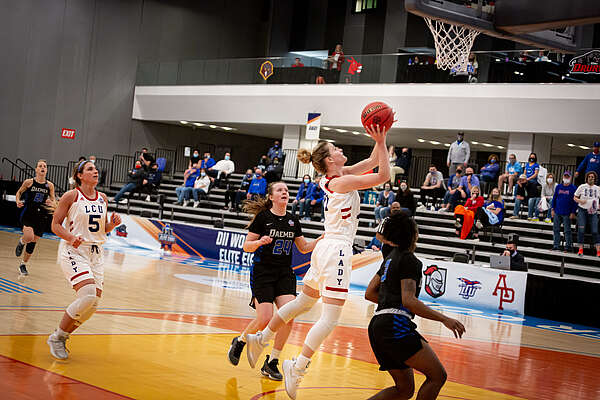 As the third period of play began, Middleton made a quick bucket off a Shulte assist, but Daemen quickly responded with their own bucket before forcing an LCU turnover, hitting a quick three pointer to cut the LCU lead to 4. Middleton got a quick block and a bucket on the other end, and the lead stretched to 32-26. Daemen's Katie Titus responded with a three-pointer to cut the LCU lead to just 3, but Shulte made a tough bucket to complete an and-one. Another Middleton score and bucket by Burr off of Shulte’s steal extended the LCU lead to ten points as Daemen College called a timeout with 4:19 left on the clock. Another bucket, pair of steals and Cunyus three-pointer added 5 to the lead, for LCU’s largest margin of the game at 44-29 with under two minutes left in the third period. On a pair of free throws from Daemen's Alahna Paige and LCU turnover allowed the New York team to cut some of the momentum, but another steal to Laynee Burr’s putback bucket kept the distance as the quarter neared its close. Daemen held the ball for what they thought was a final bucket, but Shulte’s buzzer-beater three put the Lady Chaps up by sixteen going into the final period—their largest lead in the game.

The game’s final period started off as strongly as they left off, with a Turner three-pointer. Duncan added one of her own and Shulte contributed a pair of free throws to extend their lead to 21 with under 8 minutes left in the game. LCU’s defense continued to stifle the Wildcats, holding them to misses and turnovers for much of the quarter. Daemen didn’t make a field goal until White’s bucket with 4:52 left on the clock—every Wildcat point before then had come by way of free-throws. Burr added a couple of points off a fast break, but White responded with her own bucket, holding the Lady Chap lead to 20. Cunyus’ bucket with 2-and-a-half minutes left was the last by LCU’s main scorers before Coach Gomez sent in Whitney Cox, Aubrey Robertson, and Savannah Sumrall from the bench. Laynee Burr fouled out with under two minutes left in the game, and Daemen called a timeout down 64-45. Cox added 2 with a minute to play, and the Lady Chaps closed out a 66-49 victory to advance to the Elite Eight Tournament Semifinal match against the Jennies of Central Missouri.

The Lady Chaps’ third-quarter explosion cemented the victory as they improved their shooting percentage to almost 40% and just under 50% for the period as they cruised through a 12-point run. Middleton finished the contest with 17 points, and Duncan and Shulte each contributed 12 to the effort. Gomez’s Squad held the Wildcats to only 31% from the field.

Check out the bracket and livestreams for the entire Elite Eight tournament.