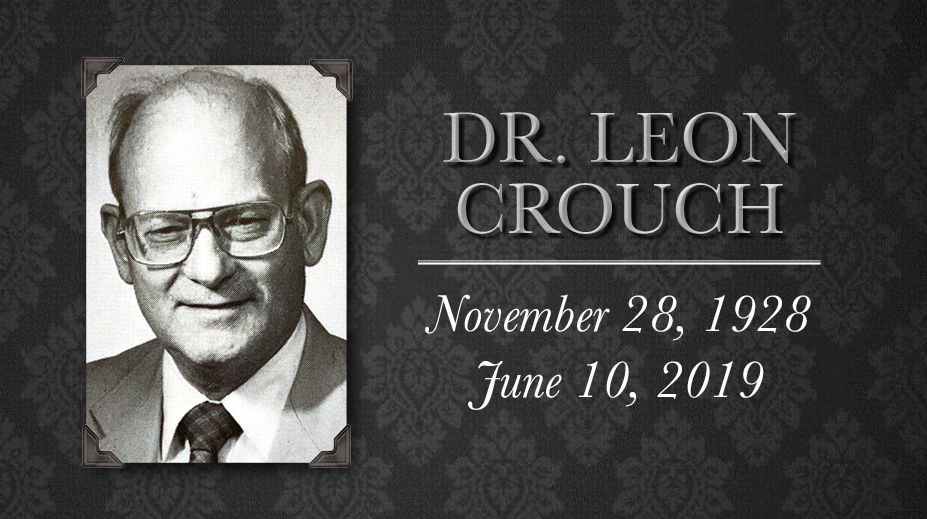 Dr. Leon Crouch was born on November 28, 1928, 44 years before he would arrive at Lubbock Christian University with a background in ministry and missions. After serving in the US Marine Corps from 1948 to 1951 during the Korean War, he returned to the states to work briefly in a funeral home in Canyon, and then as a minister in various cities before pursuing Bachelor, Master, and Doctoral degrees as he chased his passion in theology. In addition to preaching in several locations and serving in the mission field in England, he had also served as the Bible Chair Director for Texas Tech University.

As LCU expanded its faculty to meet the needs of a four-year degree program, Dr. Crouch was an ideal member for the Bible Department, where he began teaching in 1972. He was one of the original professors in the graduate Bible program and served from 1993 through 1996 as the Chair of Undergraduate Bible Studies before ultimately retiring in 1999.

LCU President Tim Perrin expressed his deep gratitude and condolences upon hearing of Dr. Crouch’s passing. “Dr. Leon Crouch holds an important place in the LCU story,” he said. “His faithful service as a member of the LCU Bible faculty played a critical role in the faith development of generations of LCU students. We give thanks for his life of service and for his deep investment in the lives of young people. The LCU community offers our love to the Crouch family in this time of loss.”

With a heart for the church and for missions, Dr. Crouch served as an example of service and commitment to God’s word and its teaching. “Leon skillfully blended his role as a Biblical scholar and his calling to serve the Church in ministry,” shared Dr. Foy Mills, Chief Academic Officer and Provost at LCU. “When Mitzi and I were juniors at LCU, Leon approached us, and a few other students, to come help him and Peggy develop a college ministry at Pioneer Park Church of Christ in Lubbock. Little did we realize it then, but we now know that he was mentoring us for a lifetime of service to the Church.”

His reputation for quality, balance, and openness in biblical interpretation was a valuable asset for LCU and the church. Dr. Jeff Cary, on the behalf of the Smith College of Biblical Studies at LCU, said, “Dr. Leon Crouch was a much-beloved member of the LCU Bible faculty. His legacy is still being felt, especially in the area of biblical languages, as evidenced by the annual Leon Crouch Biblical Languages Award given to the highest achieving student in the area of biblical languages each Spring. As both a churchman and a professor, he was a man of grace, humility, extraordinary kindness, and patience. We are thankful for his long-lasting impact on our department and for his lifelong witness to Jesus.”

Dr. Charles Stephenson, longtime Chair of the Bible Department at LCU who worked closely with Dr. Crouch, shared his memories of their time as colleagues. “He was a tough, committed man who held a deep sense of duty, not only to his country, but also to his church,” he recalled. “There was no doubt of his commitment to his faith and his service. He was highly regarded by his students as a man of Christian integrity, and the faculty across campus held him in very high esteem. He had a strong commitment to the Bible as the Word of God, and was immensely dedicated to helping his students, and to the university, in every way imaginable.”

Dr. Stephenson recalled that Dr. Crouch spent countless hours outside of class serving, traveling and representing the university and God across the nation. “It was a great loss when he left LCU and retired, and it’s an even greater one now. I considered Leon a close friend to whom I could go to talk to about all kinds of things—he was just that quality of person.”

Memorial services will be held at Greenlawn Church of Christ on Tuesday, June 18th at 10 a.m., and Visitation will be from 5-7 p.m. on Monday, June 17th.