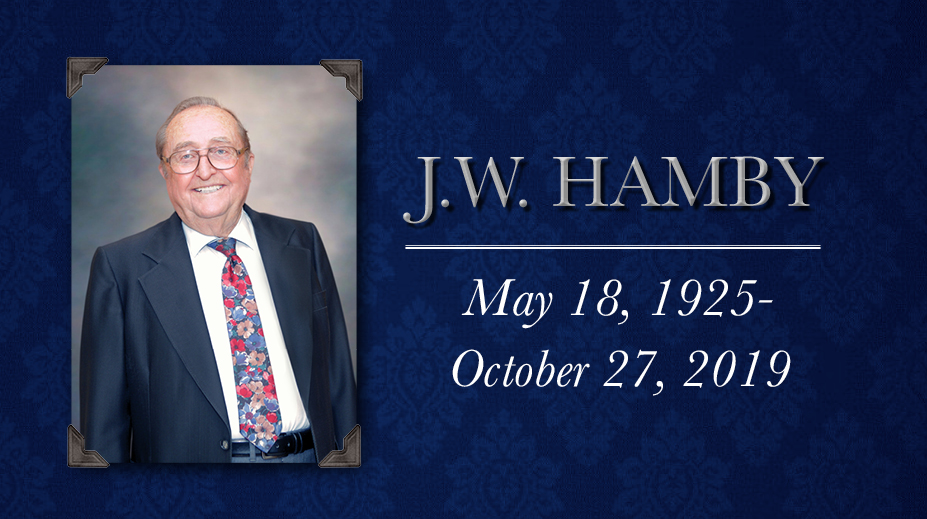 Lubbock Christian University remembers and celebrates the life of J.W. Hamby, who passed away peacefully on October 27, 2019 after 94 years of service and a life of character.

J.W. Hamby was born on May 18, 1925, at home, in Plainview, Texas to Buford W. and Eva (Hall) Hamby. After graduating from Plainview High School in the Spring of 1942, he joined the Army Air Corps, whose service he left as a captain. Hamby married the love of his life, Dorothy Jean Merrifield, in December of 1946, and they were married for 45 years and had four children before her passing on March 4, 1991. In 1954, Hamby’s dream of owning a farm equipment and supply business came true when he and his wife started The Hamby Company. The company grew under his management to employ 140 people at its height, and he was incredibly successful as he served the people of the South Plains until he sold the business in 1989, after 35 years of operation.

Mr. Hamby served with distinction on the Lubbock Christian University Board of Trustees from 1973 until 2018. In 1978, he was elected as Vice Chair of the board and served in that role until 2010. He was awarded the Pillar of Character award by the university in 1994 to signify that “his integrity in business dealings with customers and fellow businessmen throughout his lifetime earned him the reputation as a man of character.” His 45 years as a trustee spanned the presidencies of all six LCU presidents—Hancock, Hacker, Pruitt, Lemley, Jones, and Perrin.

He was appointed to the Texas Governor’s Board for Vocational Education in 1970. He had a heart for serving those in need, serving on the board for the Rainbow Room providing assistance for women and children until his death. Hamby’s passion was spreading the Gospel, supporting missionaries in Nicaragua, Mexico, Huntsville, Trinidad, Tobago, South Dakota, and Colorado. He was also involved in prison ministry for over 30 years.

A memorial service will be held at 2 p.m. on Saturday, November 2, at the Northwest Church of Christ in Plainview.