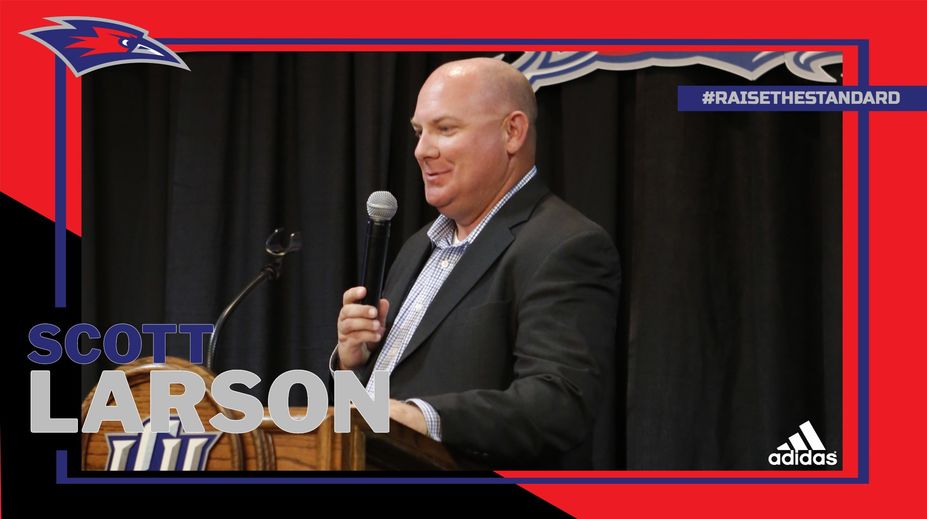 Lubbock Christian University is pleased to announce Scott Larson has been promoted as the Director of Athletics, after serving in the role on an interim basis for several months.

“We are delighted to remove the interim label and name Scott as LCU’s Director of Athletics,” said Al Roberts, speaking on behalf of LCU’s leadership team. “As the interim AD, Scott effectively managed LCU’s transition to the Lone Star Conference, and confidently led our athletic department through all the uncertainties surrounding the COVID-19 pandemic. He has demonstrated the leadership skills and technical ability to lead LCU Athletics as the university moves forward.”

Larson becomes the third full-time Director of Athletics in LCU history. He joined the Lubbock Christian University Athletic Department in June 2012 to facilitate LCU’s transition to NCAA Division II. Originally from Topeka, KS, Larson has over 20 years of NCAA compliance experience, including stints at the Arizona State University, University of Wisconsin, University of Texas at El Paso, and Northern Arizona. He is currently the chair of NCAA Division II Legislation Committee and a member of the NCAA Board of Governors Federal & State Legislative Working Group for Name, Image, and Likeness. He has also served as chair for the National Association for Athletics Compliance (NAAC), the Division II Education Program Committee and NAAC Division II Committee. In 2019, Scott was the recipient of the prestigious 2019 NAAC Division II Excellence Award.

"We are thrilled to have someone of Scott Larson's professional caliber and personal character in this role," said LCU President Scott McDowell. "He understands the necessity of excellence and mission fit for athletics at a place like Lubbock Christian University—I'm confident he will continue to recruit and empower coaches and student athletes who understand the larger agenda we are pursuing here at the University."

New Athletic Director Scott Larson stated, “I am humbled and appreciative of this opportunity to serve Lubbock Christian University in this role on a permanent basis and am grateful to President Scott McDowell for this appointment.” Larson continued, “My family and I have been fortunate enough to be a part of the LCU community for nearly eight years, and these years have been some of the best years of my professional life. Chap and Lady Chap athletics have a rich, storied history, and I look forward to embracing and honoring that history while building for the future.”