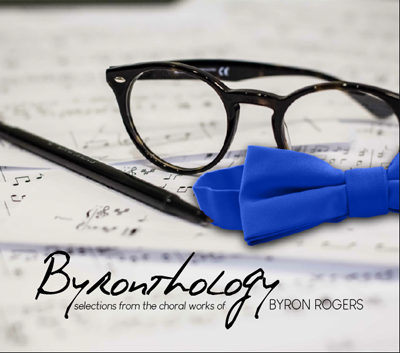 Byronthology - Selections from the choral works of Byron Rogers

Meet Dr. Byron Rogers, a beloved professor of Chemistry at Lubbock Christian University since 1986—who also happens to teach and compose music.

Dr. Byron Rogers received his undergraduate degree in chemistry from what was at the time Lubbock Christian College in 1981. He then attended Texas A&M University in 1986 to earn his Ph.D, and about two weeks after completing that program, he received an appointment to teach chemistry at his alma mater, where he has remained ever since.

Rogers made the choice to attend LCU for a number of reasons, but the most significant was to be in the chorus. Byron’s older sister sang in the Meistersinger Chorus, and after attending one of their concerts during his junior year in high school, Byron knew that he wanted to be a part of that tradition as well. Byron sang in a small group during his senior year in high school, for which he wrote and arranged music at the age of 18, and that passion carried over to his time at LCU. Charles Cox, the director for the Meistersinger Chorus affectionately remembered by many as “Brother Cox,” was a man whom Byron holds as his “father in music.” The choir director allowed Byron to arrange and direct his original composition based on Isaiah 46 for the Meistersingers during his senior year at LCU, and that was the point at which Byron feels he began his first forays into advanced composition.

Upon returning to LCU in 1986 as a chemistry professor, Dr. Rogers set Isaiah 53 to music, and Brother Cox, who was still directing the Meistersingers at the time, conducted the piece at one of their concerts. In the years since, Byron has arranged pieces for many groups on campus in a variety of styles and scopes. One such group was Best Friends, the contemporary a cappella group on campus. In 1995, he became one of the group’s main arrangers, and has annually arranged or even composed multiple works for their performances. He produced vocal charts for Master Follies beginning in 1993 and transitioned to scoring for the Master Follies band after obtaining his music degree. Byron has arranged multiple pieces for the LCU Praise Choir, Chamber Singers, and Symphonic Band, and plans to arrange a piece for the Jazz Band in the coming year.

Upon hearing of the retirement of LCU music theory teacher Dr. Ruth Holmes, Rogers recognized an opportunity. “I went to Dr. Laurie Doyle, the chair of the department, and asked her, ‘If I go and get a master’s degree in music, would I be able to teach music theory?’” Upon receiving an eagerly positive response, Byron made the decision to enroll at Texas Tech University.

“A lot of people ask me how a Chemist decides to get a degree in music, and I reply that I’ve always been a musician.” The decision to return was an easy one. Both of Byron’s children were grown and out of the house, and he used the funds he made from composing pieces for different groups to help fund his continuing education.

“All of my educational colleagues were just excited that I was getting to go back to school, and all of my friends from the business world were asking me, ‘Are you crazy, going back to school at age 52?’ and I just replied, ‘Probably, but I’m going anyway.’”

Even through his recent successes in the music world, though, Byron has held onto his love for teaching chemistry.

“I still love teaching chemistry,” he emphasized. “I told my chair at the time that I was working on my graduate degree that going back to school made me a better teacher. Remembering, again, what it was like to be on that side of the desk gave me a better insight on the teacher’s side. Getting to teach music helped me remember that I get to teach chemistry, as well. I would argue that teaching has never been a job for me—it has always just been what I’m supposed to do.

“The word ‘vocation’ is perhaps overused,” he added, “but in the true sense of a calling, I truly think that I’ve been called to teach, and I get to teach my two passions: chemistry and music.”

Byron recalled that his time at Texas Tech was very positive, not only with regards to his education, but also from the support that he had from many around him. “I have so many friends and colleagues from my time at Tech who have to go out and look for people to perform their music. I am the most blessed composer in the history of the world, because I have a director of choruses here at LCU, and a director of bands here, who ask me to write for them. I have high school directors in New Mexico, Arkansas, and Alabama, who on an almost yearly basis ask if I have time to write for them. There aren’t a lot of composers out there who are as blessed as I am in that regard.”

When asked what his instrument of choice is, Byron's usual reply is, “other people’s voices,” having first cut his compositional teeth on choral music. He confided that he is falling more in love with instrumental composition as he gains more experience. “That was one of the driving forces to go back and get the graduate degree—to get training in orchestration, to get training in writing for strings, and for brass, and for woodwinds.”

The eagerness for different groups to perform works that Byron has arranged is evident in the demand for new pieces each year. “When people ask me to write music, the answer is always yes. I don’t have time—but I’ll make time. Over the past 10-12 years, I’ve written 15 or 16 different pieces for Dr. Camp, for the Chamber Singers and the Praise Choir.”

Byron has always had a soft spot for music—in fact, he views it as his lifelong passion. “I said for years that I was a chemist who did music; after I got my music degree, I began to tell people that I’m really a musician who teaches chemistry.”

Dr. Camp used to joke that they needed to record an album just for Byron’s compositions, but over the past year, what he saw initially as a whimsical dream began to become reality.

“[Dr. Camp] came to me this term and said, ‘Could we do an album of just your music that we could sell to help fund the mission trip to Ireland in 2019?’… the answer was an easy yes!” Byron says that it didn’t dawn on him initially that there would actually be a physical album dedicated solely to his work—in fact, it wasn’t until he was listening through the final version, entitled Byronthology, with his family that he said the reality hit him.

“I was taken aback—it was such a marvelous experience for me to listen to it, because for every song that came up, either I, or my wife, or my daughter would say, ‘Oh, so-and-so was in the group that year!’ Every song that came through was a reminder of the students that I have been blessed to work with.”

The music of Dr. Byron Rogers is available either physically at the ChapStore on LCU’s campus, or digitally as an online download. The album Byronthology features thirteen of Byron’s arrangements and compositions of traditional hymns, spirituals, and Psalms, recorded by various LCU Choral groups over the past decade. All proceeds from album purchases will help fund the LCU Praise Choir’s mission trip to Ireland in the spring of 2019.