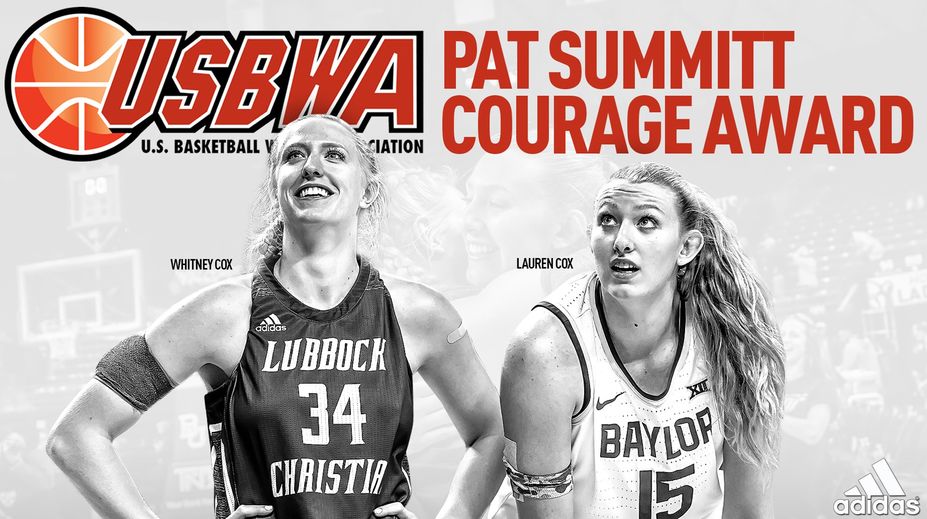 Lubbock Christian University women's basketball forward Whitney Cox had a special moment in the preseason, as she was able to compete against her older sister, Lauren, as LCU faced Baylor in Waco on October 30, 2019. Tuesday, the two were individually notified and informed they will see each other at the NCAA Women's Final Four in New Orleans, as co-recipients of the Pat Summitt Award for Courage by the United States Basketball Writers Association (USBWA).

Lauren was diagnosed with Type 1 Diabetes at the age of seven and has been a model and an unofficial spokesman towards the awareness of T1D. Her younger sister, Whitney, was diagnosed at the age of 17, and now both players have aimed to inspire others with T1D.

"As much as the Pat Summitt Award is about courage, it is also about inspiration, and certainly the Cox sisters embody both attributes," said USBWA women's representative Mel Greenberg.

Previous winners of the USBWA Courage Award in the women's division include Summitt in 2012 for which the award was renamed following her designation. The Cox sisters become the second duo to earn the honor, joining Appalachian State head coach Angel Elderkin and ESPN broadcaster Holly Rowe in 2017.

Whitney is in her first season with the Lady Chaps and has appeared in 12 games this season. She is coming off a career-high four-rebound performance against Texas A&M-Kingsville Saturday. Whitney is a Humanities major and a member of LCU's Honor College.

"Whitney has been a great example to both her teammates and coaches, as she has modeled how to courageously and gracefully deal with the daily adversity that she faces, while not only balancing life as a college student-athlete, but also the struggle of living as a type-1 diabetic," said Lady Chaps head coach Steve Gomez. "Her positive outlook on life, and the maturity she exhibits by not allowing this disease to prevent her from excelling in all of her pursuits, will continue to be a blessing to our athletic program during her time here at LCU and into all of her future endeavors.

The USBWA gives out the Most Courageous Awards to figures associated with college basketball who have demonstrated extraordinary courage reflecting honor on the sport of amateur basketball.

"Whitney might have always been one of those 'responsible' kids, but I would imagine that having to constantly monitor her health/blood sugar levels has caused her self-awareness antenna to be higher than the average person her age," continued Gomez. "Working with the training staff to constantly monitor her levels, Whitney has navigated her freshman year of school, workouts, games, travel and a variety of other challenges very well (with her bag of Skittles ever present in case of emergency).  She has been an example on-and-off of our campus, whether speaking to students during a Diabetes Awareness Week campus seminar or visiting with the family of a junior high school athlete who also has to deal with diabetes, her profile in the community will continue to expand during her years at LCU."

The Cox sisters were notified Tuesday of the honor by the USBWA and the award will be presented at the 2020 NCAA Division I Women's Basketball Final Four at the USBWA women's awards press conference in New Orleans, La.