Are you a graduate of LCU? Have you attended LCU or another church affiliated university? Do you support Christian education?
We would love to have you join the hard working fun loving women raising funds to support Lubbock Christian University!

The purposes of the Associates of Lubbock Christian University:

We participate with the University in Changing Lives. 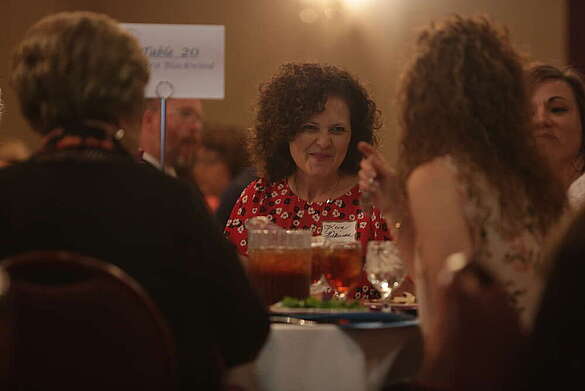 Reservations are required no later than Wednesday BEFORE each Luncheon. RSVP by call or text to Sandra Blackwood at 806.786.8468 or by email to Sandra.Blackwood@LCU.edu or associates@LCU.edu.

Monthly luncheons can be paid at the door by cash or check for a single luncheon or several at a time. They can also be paid in advance in one of two ways:

Our Hearts at Work

Any member of the Associates may serve on a committee and/or be nominated to be an officer. We are always looking to get more members involved. Serving on a committee or holding an office is a great way to be more involved.

If you have any questions or would like to get contact information for any of the officers or committee chairs, please email us at associates@LCU.edu.

The Associates have various fundraisers throughout the year. Each year they vary a little but here are some of the main fundraisers this school year.

The organizational meeting for the Associates was April 29, 1958, in the LCU cafetorium barracks. One of the first projects was to sew curtains for the windows. By October of that year there were 900 charter members. Many are still active participants. The organization has raised almost $3 million for LCU.

Each year the Associates fund unbudgeted items for departments and offices. Our ongoing project is providing funds for the library to purchase books and other media requested by the faculty. Funds were also raised to convert the library card catalog to an online catalog.

The house, designed in 1915 by Ft. Worth architect M.L. Walker, was built as a wedding present for Mr. and Mrs. J. Lanhan Higginbotham of the Higginbotham lumber family. The house was purchased in 1918 by Mr. and Mrs. Sam C. Arnett, Sr., a pioneer rancher and banker of the South Plains. The house served as their residence until 1956 and later it became one of the first pioneer Lubbock homes to be restored.

Originally located at 1214 Avenue L in downtown Lubbock, the gabled, bungalow house was given to Lubbock Christian College along with twenty acres of land on west 19th by Dr. and Mrs. Sam Arnett, Jr. It was moved to the campus property in 1957 to coincide with the opening of the college and soon became known as the Arnett House. It served the college as the first Administration building, and later was used for housing, offices, a counseling center, print shop, photo lab and the psychology/sociology department.

By 1975 the house had fallen into disrepair and with the growth of the college, was no longer in use. The trustees of the college gave the house to the Associates of LCC in February 1975 Groundbreaking ceremonies for the relocation were conducted on December 9, 1977. Those participating were Dr. and Mrs. Sam Arnett, Jr and their children, Sam Arnett III and Mrs. John Flygare; Mrs. Otis (Naydiene) Cannon, chairman of the Associates’ Arnett House committee; and Dr. Harvie Pruitt, president of Lubbock Christian College. In 1978 the house was moved for the last time, from west of the education building to its present location on 22nd street.

C.R. Billingsley of Billingsley and Stracener, Architects and Engineers worked with the Associates in planning the renovation. Claude Martin and Sons were the contractors with Byron Martin as an advisor and C.B. Martin as supervisor of the actual work. Lucille Melcher, of Cagle Brothers Interiors was the decorator.

Restoration was done in three phases: excavation of a basement, pouring a foundation and relocating the house; restoration of the roof, exterior sides and porch; and interior restoration. The reopening of the Arnett House on August 26, 1979 coincided with Dr. Sam C. Arnett Jr.’s 71st birthday.

This lovely eight room, two-story house serves as home for the Associates of LCU, an organization begun in May 1958 “to support Lubbock Christian University in all her needs.” Original features and furnishings include: glass knobs, windows and bookcases in the living room, sliding solid wood doors between the living and dining room, serving ledge and built-in china closet with beveled mirror in the dining room, butler’s pantry and cabinets, and the Arnetts’ original bedstead in an upstairs bedroom. An original oil still life, painted and donated by local artist, Toni Arnett, hangs in the reception room.

A permanent standing committee of 7 women was established in 1975 to be responsible for the operation, renovation and maintenance of the Arnett House. Mrs. Otis (Naydiene) Cannon served as the first chairman followed by Mrs. Don (Lynnita) Hufstedler and Mrs. Bob (Jan) Crockett.

The house was designated a Lubbock Historic Landmark in February 1984. In 1987, the kitchen was restored and in 1993 an annex was constructed to house a gift shop and quilting room. Renovations in 2013 included installation of new carpeting and kitchen flooring for the main floor, carpet removal and staining of the stairway, and installation of a low-maintenance floor for the front porch. In 2014 the Lubbock Historic Society made application for the house to be designated a Recorded Texas Historic Landmark, recognizing that the property is of local, regional or state significance. In 2014-2015, the Associates celebrated the 100th birthday of the Arnett House with various Centennial events, culminating on April 6, 2015 when members of the Arnett family were honored at a special LCU chapel ceremony and later at a brunch held in the Arnett House.

The Arnett House is located at 5513 22nd Street in Lubbock, Texas.