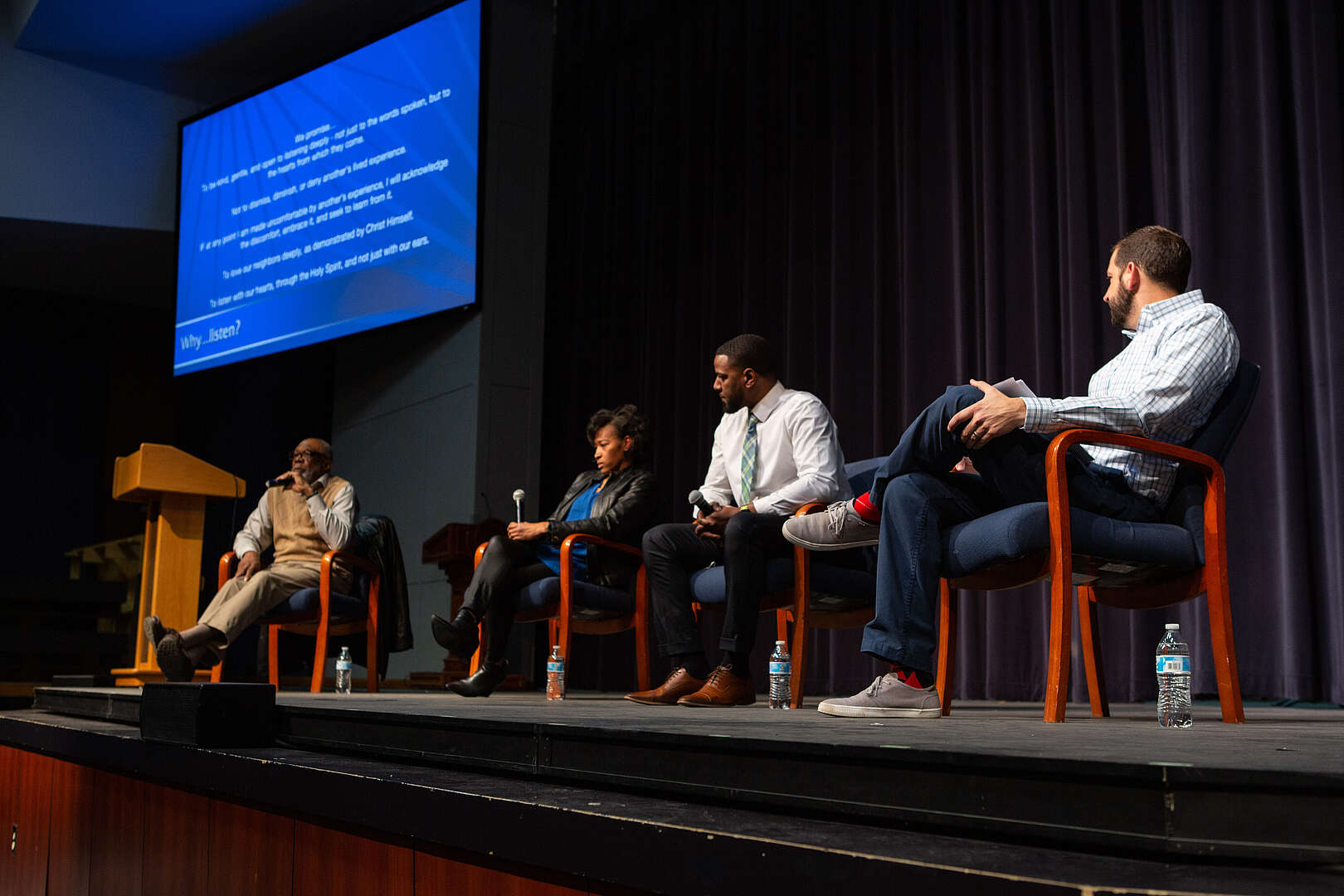 LCU Hosts “Why Listen?” A Conversation About Race

Lubbock Christian University hosted several community leaders in the McDonald Moody Auditorium for a panel discussion entitled, “Why Listen,” which explored thoughtful dialogue around the issues of racial inequality and injustice.

A.J McCleod brought a wide array of experience to the panel. He serves as the Community Youth Development Coordinator at Guadalupe Parkway Neighborhood Centers, Branch Director for the Boys and Girls Club, and Team Director for the YWCA of Lubbock, in addition to many other community leadership positions.

The final member of the panel was Milton Lee, a Lubbock native who served in the US military and National Guard from 1971-98, was a letter carrier for the United States Post Office for nearly 30 years, served the community of Lazbuddie, Texas as a minister, was the past-president of the Boys and Girls Club of Lubbock, and is a former board member and the current president of the Lubbock Chapter of the National Association for the Advancement of Colored People (NAACP).

The panel was moderated by Aaron Dawson, Missional Life Minister at Monterey Church of Christ and 2004 graduate of LCU. Dr. Jeff Cary, Dean of the Alfred and Patricia Smith College of Biblical Studies at LCU, introduced the evening and the panelist before an audience of just over 100.

In the wake of a year rampant with often-uncomfortable, heated conversations about racial issues in the United States, this initial entry in a planned series of discussions focused on listening—a key component for authentic dialogue.

LCU President Scott McDowell attended the event and offered this thought afterwards, “Listening well is at the heart of the Christian faith. As Christian people, we ought to be able to get this right—it's just a matter of applying what we know and listening well enough to allow the Spirit to guide us.”

A.J. McCleod shared “There are people who haven't had this conversation before, and it's very important to hear other people’s perspectives, and understand that just because somebody else's truths—their experiences—aren't what you’ve experienced, that doesn't mean they're not valid.” McCleod continued, “Tonight, many heard a perspective that they may not have heard before. Ignorance isn’t something you can control, because you don't know what you don't know. Often, having these kinds of conversations is the best way to learn.”

“LCU needs to be at the forefront of this conversation,” emphasized Professor Williams. “First, because we bear the name of Christ, our responsibility is to reflect that, in everything we do. In the university’s mission, we declare that we're preparing students to be the hands and feet of Jesus for lives of purpose and service. Part of that preparation is ensuring that they understand the value of differences, that each unique person is still created in the image of a most-high God. Our differences are intentional for the Kingdom work that we were created for.”

“I love another thing that Monica pointed out,” said Dr. McDowell. “She emphasized we can’t wait for someone else to fix these issues. I think that's what the gospel calls us to. It's always a story of one person making a difference because of God acting in their heart and compelling them—just like is says in 2 Corinthians 5:14: ‘the Love of Christ compels us.’”

“It's a shame that 2000 years after the cross, we're still starting conversations like this,” he added. “I do think that, as Jesus-followers, we have something valuable to speak into this discussion. But before we speak, we must listen.”