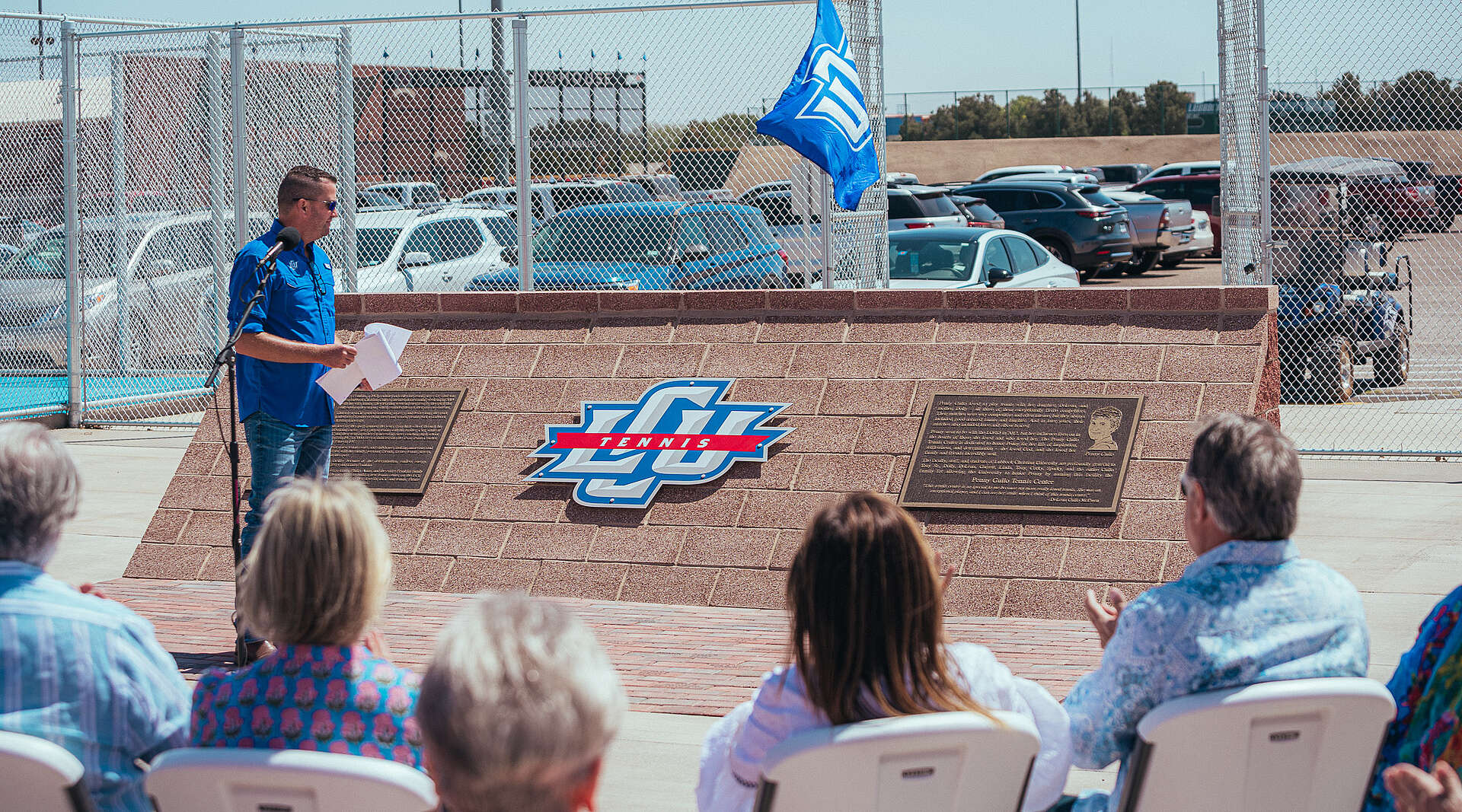 Lubbock Christian University (LCU) celebrated the dedication of the new Penny Gullo Tennis Center and Jerry and Linda Franklin Clubhouse—new resources not only for LCU but also for the greater Lubbock tennis community.

The Gullo Tennis Center features 8 courts which have been painted a beautiful sky blue surrounded by royal blue outer boundary. The Franklin Clubhouse includes a team room, men's and women’s locker rooms, and a coach’s office.

The Gullo family has been integral to the success of many recent initiatives on the LCU campus. Tony and Dolly Gullo are honoring the memory of their daughter and her love of the sport by naming the facility the Penny Gullo Tennis Center. While Penny never attended LCU, her daughter DeLena is a 2000 graduate of the University.

Jerry Franklin, a 1963 graduate and collegiate tennis player for what was then Lubbock Christian College, and his wife Linda championed the effort to bring tennis back to LCU. The courts and clubhouse are a testament to their love for LCU and tennis. The tennis facility reflects the determination, energy, self-sacrifice and contagious influence of Jerry and Linda Franklin as they rallied fellow LCU alumni and friends to the effort.

Scott Larson, Director of Athletics for LCU, said, “The Penny Gullo Tennis Center as well as the Jerry and Linda Franklin Clubhouse are incredible additions to our campus. We look forward to the return of varsity tennis to LCU in Fall 2022 and the additional student-athletes that will be an integral part of the University’s mission. We are excited about becoming a part of the Lubbock tennis community and plan to host a variety of UIL and USTA matches as well as other youth, adult, and community tennis events.”

As Larson stated, the new facilities bring with it the return of competitive tennis to LCU, which has not been offered since 1982. Jason Speegle has been hired as tennis coach for the University. Speegle came to LCU in 2021 after serving nine seasons at Southwestern College (KS). While there he led both the women’s and men’s tennis programs to multiple title championship tournaments.

Coach Speegle shared, “It has been so exciting to drive by each day and watch as the Penny Gullo Tennis Center and Jerry and Linda Franklin Clubhouse are being constructed. My hope is that LCU will become a hub for tennis in the Lubbock community and that we will be able to host many tournaments, clinics, camps, and other programs that will add a new dimension to the already vibrant LCU campus.”

Learn more about the athletic programs at LCU.