While nothing can compare to mom's cooking, Salvador and his dining services team of chefs and staff creatively keep your hunger at bay. There are several dining options to fit your likes and your schedule. Whether you have a meal plan or just stop in and pay as you go, you will enjoy the variety of options available to you on campus.

Every day in the Caf, we offer many different options for you dining needs: we have a gourmet pizza station; a daily International Flavor; a station for comfort food; a grill for burgers, hot dogs, and fried chicken sandwiches; a custom hot sandwich option; a fresh produce market; and a breakfast pantry stocked with more cereal than you could ever eat, open for all 3 meals, every day.

Prices per semester are listed in our Meal Plan Options and include a Munch Money declining balance which can be used at the coffee shop or snack bar. 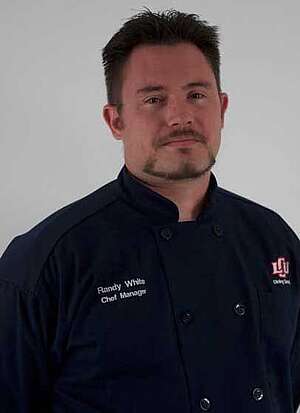 Chef Randy White was born in Lubbock and found his passion for food at a young age. Chef White graduated from Lubbock High School, and between playing football, running track, playing inline hockey, and keeping up with his classwork, he worked as the lead cook at Moose Magoo’s. Chef White worked there under a chef from Louisiana who inspired him to go to culinary school.

After 2 semesters in Texas Tech's Construction Engineering program, White decided that he would not be happy unless he answered his true calling, food. He moved to Dallas to study at the Art Institute of Dallas’s Culinary Arts program. There he had the privilege of learning under some great mentors including a rare Master Chef.

In 2018, he obtained a certification from the Culinary Institute of America for ProChef Level II—the equivalent of a Certified Executive Sous Chef.

He has two kids, Elizabeth and Aidyn, with whom he likes to bake, watch anime, ride 4 wheelers, camp, fish, and play games.

The LCU Dining Services is truly a partnership between the university and Aramark, an outstanding food service provider.