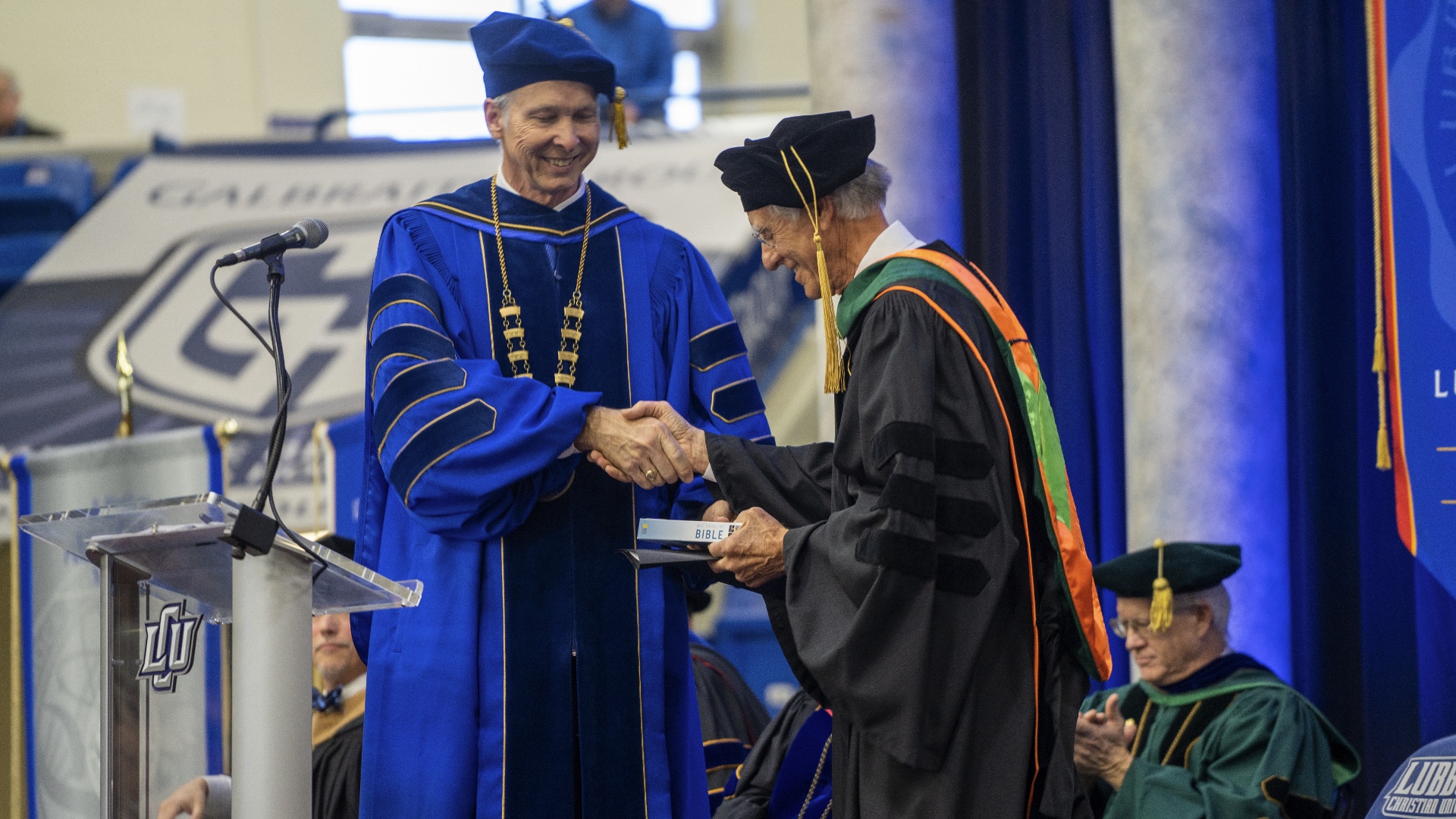 During the undergraduate program in the Rip Griffin Center, the namesake of the B. Ward Lane College of Professional Studies addressed the graduating students, their families, and the attending staff and faculty members. Aside from offering encouragement, the LCU Trustee gave countless bits of advice and lessons from his own life, urging the graduates to intentionality as they pursued their careers, families, and passions.

Dr. Ayers, whose time as a faculty member at LCU spans more than thirty years, has been a staple in the education department. He addressed those graduate students completing their studies during the graduate commencement ceremony in the McDonald Moody Auditorium, congratulating them and their families on their accomplishments and pushing them to pursue their best in everything they do going forward.

Dr. B. Ward Lane, himself an LCU graduate from 1962, was very involved as a college student, lettering in basketball, singing as a member of the Meistersinger Chorus, and was elected Student Body President and a Mr. LCC selection. After pursuing an education in medicine, he eventually established his own very successful peripheral vascular and general surgery practice in Dallas in 1974, and over the course of his medical career, had hospital privileges at Baylor Hospital, Presbyterian Hospital, Gaston Hospital, Medical City Hospital and Ambulatory Surgical Center—all in Dallas. As an acknowledgement of his expert surgical skills and ability to communicate, he taught surgery to medical students at Emory University, University of Texas Southwestern Medical Center, and at Baylor University Medical Center at various times from 1972 to 2004.

An accomplished medical surgeon, Dr. Lane served in leadership in the various hospitals in which he worked and was a member of numerous medical societies, associations, and boards. Some of his many responsibilities included the following roles: Program Chair for Surgical Grand Rounds at Baylor; Medical Director of Vascular Services for Medical City Dallas; Chief of Surgery for Medical City Dallas; Secretary and President of the North Texas Chapter of American College of Surgeons; Associate Examiner for American Board of Surgery; Board of Governors for American College of Surgeons; and National Medical Director for Advanced Cardiovascular Technology.

Dr. Ayers taught every grade from Pre-K to 5th grade as an elementary teacher in San Antonio and Lubbock. He served as an assistant principal at six campuses before serving as principal at Hardwick and Roscoe Wilson Elementary Schools, Hutchinson Middle School, and Estacado High School. Dr. Ayers also served as the Lubbock ISD Assistant Superintendent for Elementary over 40 campuses and as the Associate Superintendent for Teaching and Learning.

Dr. Ayers was asked to teach only one semester at Lubbock Christian University but ended up serving as an adjunct professor at LCU for twenty-four years. He has taught full-time at LCU for seven more and currently serves as the Director of Graduate Education. He has written numerous articles for newspapers, magazines, and professional journals, and has written 22 non-fiction and biographies for young readers. He has given presentations on historical topics, instructional strategies, and leadership at state and national conferences, and has received state and national awards as a principal and teacher. Recently, he was honored with the 2021 Texas Council for the Social Studies Billy Sills Distinguished Service Award.

View the undergraduate and graduate ceremonies, or learn more about LCU’s College of Professional Studiesor School of Education.